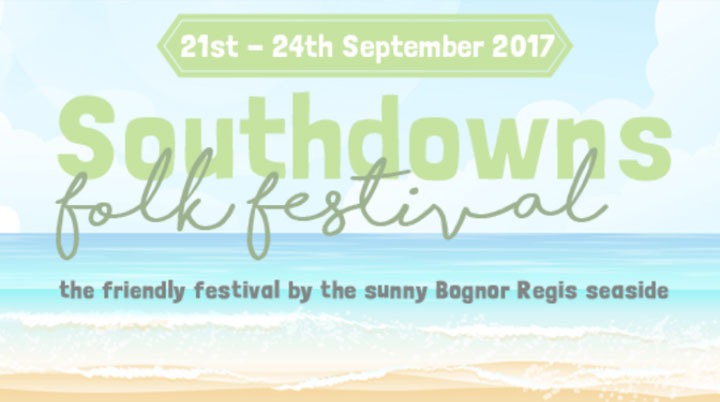 Sussex by the sea is the place to be at the end of September when the 5th Southdowns Folk Festival brings the best of British roots acts to the county for one of the last music festival flings of summer – this year extended to four days.

Back by popular demand to open the Friday night with be inspired husband and wife duo Megson (triple BBC Radio 2 Folk Awards nominees Stu and Debbie Hanna) with their clever original songs and new takes on traditional numbers before the revered and reformed classic band Home Service take to the stage, now led by virtuoso John Kirkpatrick on lead vocals and squeezebox.

Bound to get the joint jumping and flying the flag for Scotland will be Saturday night Celtic rock headliners Skerryvore, supported by the local Southsea-based Alastair Goodwin Band. The eight-strong Skerryvore, twice winners at Scotland’s Traditional Music Awards are on a fast track journey that has taken them from the remote Isle of Tiree to international performances including shows in New York’s Central Park and Shanghai’s Expo Live.

The final night will see the inimitable Richard Digance headlining. Celebrating his 50th year as an entertainer the ever popular Digance turned his back on showbiz for his first love of music following a BAFTA nomination for TV Entertainer of the Year. A British Academy of Composers Gold Award recipient he has notched up some 4,000 live shows, 62 British tours, 14 books, 3 stage plays and 32 albums!

He will be supported by one of the most exciting and innovative duos on the scene – Devon’s Phillip Henry and Hannah Martin, who recently changed their stage name to Edgelarks (and bring out an album of the same name in October).

In the Regis Centre Studio on the Saturday and Sunday will be a raft of other top quality performers spearheaded by French-born Flossie Malavialle and acclaimed Irish-American singer songwriter Sarah McQuaid while the final of the festival’s Sussex Young Folk Competition (sponsored by Butlins Bognor Regis) will be contested in the town’s The William Hardwicke pub. The event is open to eight to 21 year old up-and-coming folk, roots and acoustic musicians and singers, performing either original material or covers.

The festival which originally flourished in the Eighties, was revived by Nash in 2013, and last year brought some 25,000 music lovers to the town for a weekend of seaside folk and fun.