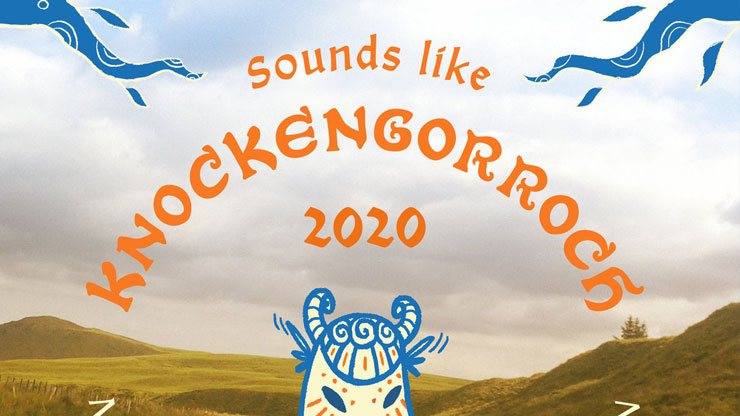 Double CD  as diverse as the Knockengorroch gathering itself – hopefully Covid clear, held this coming September – which was laid over due to circumstances and replaced by a digital event.

Most of this eclectic roster have become firm festival favourites, whilst clearly showing the events roots in traddery, jigs and reels, some of the acts here push the envelope, others burst out however you try to pigeon hole them. Bravo says I, the wider the better!

Contained in a decent – and not a smidgen of plastic included – card sleeve which itself is a six panel wonder, the 2 CDs ‘ Dodd Hill’ and ‘The Deugh,’ respectively make a decent fist of enticing those with more open minds to check out the wilds of south west Scotland and hopefully decent weather in the early autumn.

Any album which includes a track as delightfully named as ‘Lock Down Garroch Reel,’ by no less than The Afro Celt Soundsystem, a whoosh of electro trad, tribal vocals and ethic beats deserves a fair hearing. As they say there’s more… Shooglenifty, ‘Black Dog,’ is equally compelling if a little more Balkan, whilst Kaela Rowan’s ‘As I Roved Out,’ is gently soothing and simple with a wandering guitar line.

DJ Dolphin Boy does his level best to remix Scots dialect, dance rhythms and whistles as ‘No End.’  The ‘Unknown But Glorious Track,’ award goes to Awry with ‘ An t- Orceastrian,’ all pipes, flying fiddle and bongos thumped like the Dickens.

More fringe acts make this a journey worth taking from the delightful  acoustic strings of Ewan  McLennan’s tumbling  ‘Roll On,’ to Cera Impala’s back porch simplicity ‘Nothing.’ Subtitled  ‘Music From The Hills In Lock Down,’ it seems there’s far more going on than Knockengorroch are given credit for. A small festival with a warm welcome and big intentions. What more could you want?