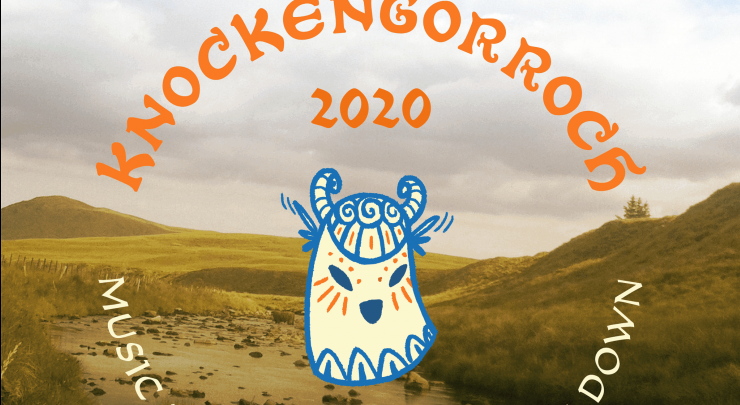 Knockengorroch Festival has announced the release of a lockdown album, Sounds Like Knockengorroch, featuring 20 tracks from artists who performed at Virtually Knockengorroch – an interactive live stream of the festival held in May 2020.

One of Scotland’s longest running greenfield festivals, Knockengorroch is normally held in the beautifully secluded Carsphairn hills in south west Scotland every May, bringing an exciting array of traditional, electronic and world music acts to the hills of Galloway.

Due to Covid-19, the event’s 2020 edition was cancelled and organisers put on an online festival in its place. Despite being hosted digitally, Virtually Knockengorroch embodied the authentic, participatory nature of the event, with attendees able to interact with the performances via Zoom.

Following its success, organisers decided to pay tribute to the festival’s unique atmosphere, and the feelings of community and connection it evokes, by capturing the sounds of the festival in a specially curated album.

The 20-track double CD includes donated recordings from an inspiring mix of folk, world and electronic music acts who were part of the virtual celebration earlier this year including two tracks written in honour of Knockengorroch and another three recorded for the first time for the album.

Afro Celt Sound System has contributed a new track named after Knockengorroch, Lockdown Gorroch Reel, which has an accompanying video featuring scenes from Virtually Knockengorroch. The reel was inspired by the festival’s party atmosphere – marked by nights of non-stop ceilidh dancing – and will be free to download for 2020 ticket holders.

The first single off the album, Roll On, came from Scottish folk musician and singer songwriter Ewan McLennan, who is a regular and much-loved face on the Knockengorroch bill, with another from  banjo player and singer Cera Impala planned for the New Year.

Eilidh Shaw & Ross Martin and Morag Brown & Lewis Powell-Reid have also all recorded songs for the long-standing Scottish festival’s lockdown album, while little-known duo Anima’s track Fireside Companion is written about the festival’s Celtic Longhouse building, which complete with a turf roof, traditional wattle and daub walls and lum over the fireplace is an unforgettable, intimate performance space at Knockengorroch.

Among those also to appear on the album are Shooglenifty, John Fairhurst, Mungos Hi Fi and Marina P, Samson Sounds, Awry, The Poozies, Macmaster/Hay and DJ Dolphin Boy.

Virtually Knockengorroch was a way for us to share the sounds and feelings of the event with our loyal audiences and to lift their spirits during lockdown. Our festival is known for its sense of togetherness and solidarity, and this is what this lockdown album also projects.   It was incredible to receive such thoughtful and emotive original songs dedicated to the festival from some of our favourite musicians for this record, and to receive contributions from so many much-loved acts. It’s an joy to be able to combine the work of all of these artists on one album and mark their contribution to Knockengorroch over the years. With acts not able to get out there and play live we wanted to champion their art and lift this up.”

2020 would have been the 34th edition of Knockengorroch which first launched in 1998.

The Knockengorroch Lockdown album is now available for pre-order.  It is released on double CD and available to download and stream from 4th December.