So Much To Defend – Chris Wood 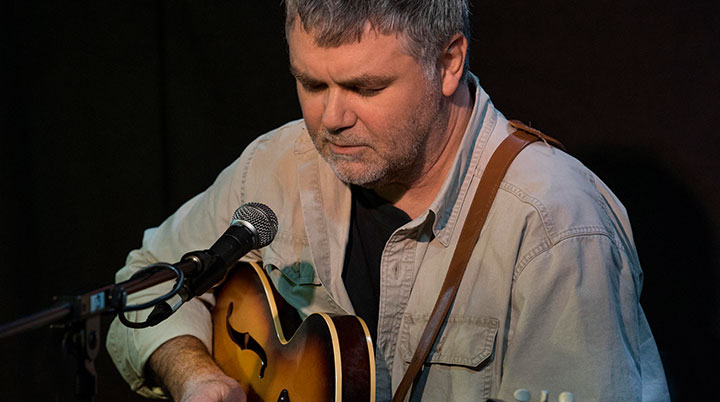 Coming to the fore through the folk clubs where he was often accompanied by Andy Cutting, Chris Wood has established himself as a sharp toned commentator on the political whys and wherefores that surround us. The ‘So Much To Defend’ title of his latest release makes it clear that prodding our conscience is still the name of the game for him. The understated sleeve with the absence of the artist’s name and the emphasis on the title is typical of his social commentary first view.

Opening with the title track, he reminds us of the need to stand firm against those who would rob us of simple pleasures such as football supporting or essential needs such as a decent job. A way with words takes the individual tales from geckos to camper vans and Skype to the online Woody Guthrie shop. As ever, his articulate songwriting continues to get across serious points in a rich and gentle musical framework. Naturally, his personal view comes across and, for example, may leave royalists aghast when he uses A.E. Houseman’s words on ‘1887’ to dig at who saves the Queen.

I wouldn’t want you running away with the idea that this all ‘in your face’ political commentary. Wood turns himself to themes of love whether that’s your local football team in ‘Only A Friendly’ or a daughter growing up in ‘This Love Won’t Let You Fail’ with its simple guitar motif and the warming sounds of a Hammond organ that cements the whole. Each song is as rich as a painting with colour and characters popping up in a way that would have made Hogarth proud. However, this rake’s progress doesn’t stop at politics and love, Wood is happy to reflect on his own career in ‘More Fool Me’ casting himself as the song and dance man at the end of the recorded music business.

So, on this last point, let’s prove his jolly refrain wrong and go out to buy this record. If nothing else, we’d put that cheeky grin on his face and be sure that the money is spent by a bloke with a social conscience.