Singing It All Back Home – Naomi Bedford and Paul Simmonds 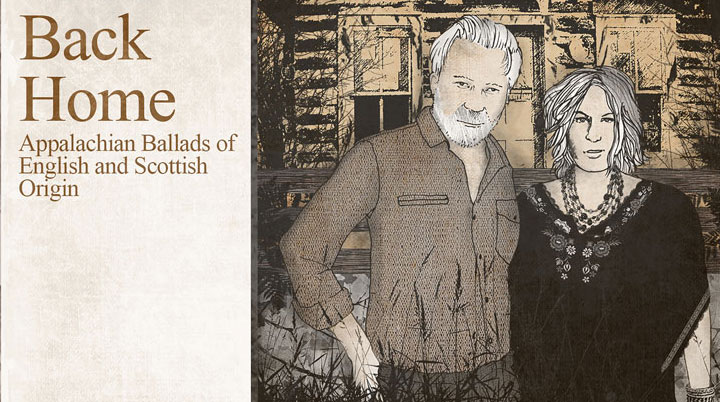 An album of ‘Appalachian ballads of English and Scottish origin’.

I’ve been to the Appalachian mountains just once, the White Mountains in New Hampshire. And it’s easy to see how these green horizons must have welcomed settlers from the British Isles centuries ago. Strangers in a strange, yet familiar, land – and what a land. Hills and valleys that stretch farther than the eye and mind can comprehend, trees that make our woods and forests seem like mere attempts at what a forest should be. A climate that echoes ours yet does everything to another level, continent crossing winds with unearthly energy, rains that explode rather than fall. Yet sweet sunshine teases the trees into a pointillist palette of rusts, ochres and blood red every fall. Wild flowers astonish with their vivacity wherever the sun hits a gap in the canopy. Eagles fly overhead and chipmunks dart about as if they are late for something more important.

Music that travels in the heart of settlers inevitably adapts to new surroundings. The songs they sang in the old country became a different branch and a new tradition is formed. We harp on about ‘tradition’ an awful lot in the folk world don’t we? our understanding of it is generally framed by the likes of Cecil Sharp, collectors, curators and more often than not editors of what the ‘peasants’ were singing. In reality there were many things more important than music in people’s lives, getting food on the table and not being eaten by bears or wolves probably weighed on minds more than how a particular tune went.

More than likely any sense of tradition only went back a generation or two, if you heard your grandparents whistling a tune you would remember it and they would correct you when you got it wrong. The settlers who moved to a new land brought what they could carry and a few pennies in their pocket, Gran and Grandad were left behind. So what we ended up with was a speeded up process of change, without the older generation around to say how a tune should be played people were freed up to experiment. Plus, those Appalachian experiments existed in a neat geographical bubble, so pretty quickly a new tradition was formed. Traditions eh? just call something one and it is.

Interestingly in the sleeve notes Paul Simmonds hopes that where they have added their own interpretation, that they have done so within the folk tradition. Rest easy Paul because you have done it perfectly within and without of the ‘tradition’.

What a fertile breeding ground for experimentation and adaptation those Appalachian hills were, in an esoteric sense one wonders if the new climate affected the timbre of the instruments they played, undoubtedly playing outdoors and hearing the music carried across valleys must have done. This is where Naomi and Paul have created such a brilliant teasing out of that unwritten world that underpins these songs. Getting a feel for those lives that created the music is crucial to making music with vibrancy. The pair mined the archives at Cecil Sharp house for the songs collected by Sharp, Shirley Collins leant her knowledge and encouragement. But ultimately they have captured and created something that cannot be held in words and musical notation.

They capture that sunlight that turns grains of pollen to fireflies in the late evening, when the air changes from a dry warmth to a hint of the dew to come. You can feel what those Appalachian settlers must have held in their hearts, what they hoped for and the memories of home that drifted into their dreams. It’s an evocation and a celebration, plus it’s just damned good fun.