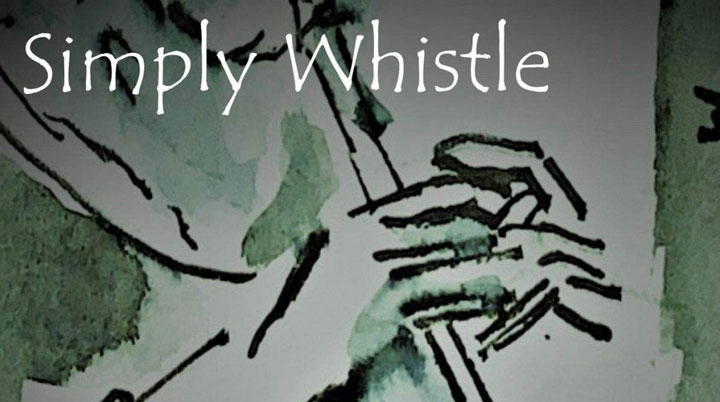 Manchester native Pat Walsh was the youngest of four children born on May 31st 1954 in Collyhurst in St Patrick’s Livesey Street, another one of the mighty Mancunian traditional dynasty spearheaded by more popular names like Michael McGoldrick and Dezi Donnelly. Along with Angela Usher she gives a fine example of the quality of traditional music played by women in Manchester.  When thinking of female tin whistle exponents, the regal names of Mary Bergin and Joanie Madden reign – supreme but there are also quality regional whistlers whose fame is mostly local. Pat Walsh deserves her slice of the fame cake if this album is anything to go by.  Simply Whistle is just that –19 tracks of reels, jigs, flings, hornpipes and a waltz with the whistle up front and given subtle unobtrusive backings to make music that provides pleasurable listening as well as opening up a closely guarded secret well of compositional and interpretive riches.

When names like John Doyle and Mike McGoldrick are in the supporting cast then certain assumptions are made that the backing and production will be of the utmost quality and skill and the result of the highest regard. Indeed, both Doyle and McGoldrick provide the bulk of the accompaniment and the latter adds supple flute and bodhran to the ‘Fingal’s Cave/Sporting Paddy/Tie The Bonnet,’ medley that makes for a solid bare boned sound. Doyle’s bouzouki and guitar winds itself sympathetically around the whistle on ‘The Pondering Jig/Diplodocus’ in a highly pleasing manner.  ‘Simply Whistle,’ is a finely wrought debut unveiling an important local talent that deserves wider exposure.

The Flemish Trio Dhoore’s fourth album ‘August,’ confirms the promise the brothers displayed on their debut recording Modus Operandi in 2013. They play hurdy gurdy, diatonic accordion, guitar and keyboards between them and their music all self-penned recalls traditional folk roots and ideals balanced with contemporary ambient soundscapes –yet the main effect of their music is its humanity and accessibility.   The nine tracks that make up ‘August’ are linked withinthea story of a Flemish fisherman named who survived thirty-three dangerous trips between Flanders and Iceland in the 18th century to feed his family. ‘Haven,’ has a neatly clipped rhythm with purring accordion trills and rapid-fire piping while the opening title cut beckons attention with a blanket of accordion, guitar and synthesizer ushering a melodic and attractive foil. Ward Dhoore’s nylon string guitar underpins ‘Heuvelland,’ while the hurdy gurdy and accordion float gently above it and  ‘Poldervuur,’ picks up the pace to a fast polka/ march time rhythm with swirling waves of reeds and strings.  The pieces are evocative and finely wrought and above all accessible combining subtle rhythms and idealistic nuances in a cohesive yet concrete manner.  File August under promise delivered.

The idea of following The Trio with Tom Moore and Archie Moss is more than co-incidental as they form 2/3 of the Moore, Moss and Rutter trio and their music has a traditional base and contemporary overtones. They play accordion and viola and synthesizers and work on mixing contemporary ideals to traditional rhythmic bases. Their music is spacey, floating, ambient with a foreboding electronic edge and is all original. This makes them an ideal English compliment to the continental nuances of the Tri but there is a more experimental and minimalist approach evident in ‘Spectres.’ This gives it a semi-classical feel that is more formal and experimental in its aura.

The eleven tracks are mostly improvisational in approach and tone and while rooted in English folk music it borrows from its European counterparts. The title track plays strongly on the lilting trills of the Nordic and Flemish traditional styles with purring accordion and viola gliding sweetly on a fjord like base. ‘Pop One,’ continues on the rich depths of the accordion and viola with sampled percussion and Oculous again invites Nordic Hardanger fiddle and Nyckleharpa like drones to create a tightly knitted web of semi jig like movements.  This is a solid sensuous music that makes its own melodic impact and subtly weaves splashes of electronics with a strong traditional ethnic backbone.

The Shakuhachi is a Japanese bamboo flute that is similar to a cross between a recorder and a low whistle. It has a bass like sound mixed with the clarity of a low whistle. Mix that with the Finnish Kantele which is like cross between a hammer dulcimer and a zither and you have an ambient paradise. That’s the premise of Forest of a Thousand Songs a collection of instrumental pieces by Peter Phippin on shakuhachi and ocarina and Arja Kastinen on Kantele.

Their second collaborative effort, the American Finnish duo work within an improvisation and storytelling field musically. Again, listening closely one can catch the traditional Japanese and Finnish sounds though the bulk of the music consists of slow-moving pieces that build, ebb and flow without reaching any kind of exciting climax, neither do they invigorate energetically but they provide perfect low key meditational music or background. One has to still the ears to appreciate the nuances which are majorly low-key and yet their own quiet storm is distilled and created.  Natural sounds from the ancient ringing stone on the Noto Island in Finland add to the mystique surrounding this release and the sense of spacious minimalism achieved.

Steve Tyler’s ‘The Enduring and the Ephemeral’ boasts “Hurdy Gurdy based multitrack compositions for the end of time”. That boast is certainly set by the thunderous drum opening to ‘The Second Law,’ followed by waves of synthesizers and the hurdy gurdy. Famed in song by Donovan and having exponents as diverse as Jake Walton, Francis Banes, Andy Irvine and Jean Pierre Lecuyer, the hurdy-gurdy is a stringed instrument that produces sound by a hand-crank-turned, rosined wheel rubbing against the strings. Melodies are played on a keyboard that presses tangents—small wedges, typically made of wood—against one or more of the strings to change their pitch.

Like most other acoustic stringed instruments, it has a sound board and hollow cavity to make the vibration of the strings audible. Here they provide the multi –faceted sounds that conjure images of ethnic styles and idioms as diverse as French, Greek and Eastern European folk styles as well as spacy folk-rock and ambient styles as radical as a more ethnic sounding cross of Hawkwind, elements of Krautrock and music concrete. Other instruments like bagpipes, viol, acoustic guitars and keyboards add to the array of sounds and styles to create a richly hewed musical palate.  This is music for contemplating as well as listening and highly compelling in its strange and stylistic diversity.