Show of Hands are to release a single and video to mark the centenary of the first day of WW1’s Battle of the Somme. Steve Knightley and Phil Beer will offer one of Knightley’s finest songs, The Gamekeeper as a download single from July 1, tying in with a day-long tribute in their home city of Exeter to the 19240 Allied servicemen lost on the opening day of one of the worst battles in history.

That night, the Devon duo, and long-term collaborator Miranda Sykes, will perform a special centenary concert in Exeter Cathedral, joined by one of Britain’s best-known and best-loved acting couples, Jim Carter and Imelda Staunton. While Jim has been Emmy-nominated for his role as Carson the butler in TV’s ratings-topping Downton Abbey, Imelda won ‘Best Actress in a Musical’ Olivier Awards for her performances in both Sweeney Todd and Gypsy, and is known to many for her role in the Harry Potter films. 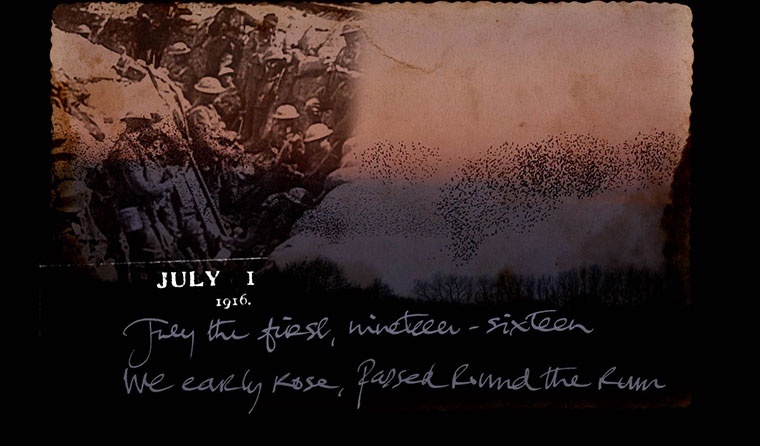 Devon’s Lost Sound Chorus will also take part in the event which will raise funds for the West Country project Shrouds of the Somme with profits to be donated to armed forces charity SSAFA and The Exeter Foundation – the Exeter Chiefs rugby club charity – to be distributed among local and military causes.

Tickets for the 7.30pm concert, price £15 to £25, are available from Exeter Cathedral on 01392 285983 or online at exeter-cathedral.cloudvenue.co.uk/Showofhands

The concert will feature songs and poetry from Show of Hands’ acclaimed album Centenary –Words and Music of The Great War, described by one critic as “uplifting and redemptive”. The double album, which also featured Carter and Staunton, includes ‘The Gamekeeper’, with its moving WW1 analogy.

‘The Gamekeeper’ is available as a single download on iTunes. Full of visual imagery, it tells of a Devon man returning home to his life as a gamekeeper after fighting in France with the poignant parallel of “walking towards the waiting guns”.

The song also features some of the West Country’s finest musicians including BBC award-winning duo Phillip Henry and Hannah Martin, with some beautiful dobro work from Henry, as well as Jim Causley, Rex Preston and Geoff Lakeman. At Exeter Cathedral, Jim Carter and Imelda Staunton will read poems by war poets such as Wilfred Owen, Siegfried Sassoon and Rupert Brooke against musical backcloths composed by Show of Hands.

Says Imelda: “We were delighted to be asked to work on the centenary project. The music is beautiful and the poems work so well. It is very moving and we feel very proud to be a part of it.”

Earlier in the day, Exeter’s Northernhay Gardens will see the public opening of the powerful Shrouds of the Somme Memorial – a remarkable community art installation by Rob Heard. The Somerset artist has painstakingly hand stitched calico shrouds onto 19240 12 inch figures representing every Allied soldier who died on the first day of the Battle of the Somme. The gates of Northernhay Gardens will be opened to reveal the art work exactly 100 years to the minute from the time the whistle sounded for the British to go ‘over the top’ at 7.30am on July 1.

Steve Knightley, who has been closely involved in the unique project, serving on the committee, says: “It will be an extraordinary event and very moving to cast your eyes on this incredible sight of shrouded figures next to Exeter’s war memorial, making that massive loss from just one day so real. This is the culmination of two years’ work for Rob but will hopefully make visitors think and remember for years to come.”