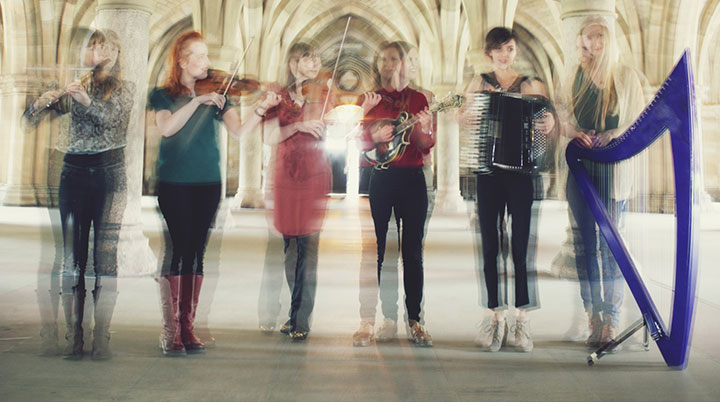 The Shee’s 2016 album, Continuum, continues to garner critical acclaim – and the band is responding to demand by taking to the road for a second album tour. The album, composed and released in celebration of the band’s tenth anniversary, will be the focus of the nine-date tour which takes in venues throughout England, Scotland and Wales.
The Shee April 2017 live dates are:
9 Coliseum Theatre, Aberdare
10 Otley Courthouse, Otley
11 The Sage, Gateshead
12 Wiltshire Music Centre, Bradford-on-Avon
13 The Met, Bury
14 Universal Hall, Findhorn
15 The Stables, Cromarty
16 Workshops and acoustic show alongside mini festival featuring local artists as curated by The Shee, The Old Brewery, Cromarty
17 Lyth Arts Centre, Wick
‘We’re delighted to be taking Continuum back out on the road again in Spring,’ says accordionist and clog dancer, Amy Thatcher, ‘playing for people up and down the country is our real passion and we’re so pleased that the album has captured so many people’s hearts and minds.’
theshee.com