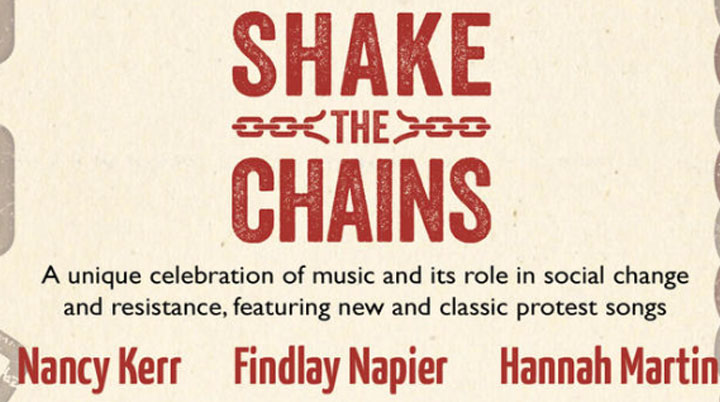 From the industrial revolution, universal suffrage and the slave trade through to CND, Rock against Racism and the Miners’ strike, songs are a common and integral factor in all the movements that have sought to instigate change.

Shake the Chains is an exciting new touring commission from celebrated UK contemporary folk singer songwriters that will explore the role songs have played in social change, resistance and protest.

At a time when making our political voice heard is as important as ever, Shake the Chains will include new material written exclusively for the project, as well as classic protest songs from around the world.

This exceptional band of musicians will play venues in Bristol, Sheffield, Suffolk, Derby and London from February 23 to 27 with a special guest at each performance.

Shake the Chains will also perform exclusively at Folk by the Oak in July 2017, with a live album scheduled for release in September 2017. Shake the Chains follows on from the critically acclaimed Sweet Liberties project that created new material in response to 800 years of the pursuit of democracy.

Shake the Chains is a commission from Folk by The Oak with support from Arts Council England, Help Musicians UK and Folk Alliance International.