Though its title, ‘Secularia’, might hint at something different, there is only one word needed to describe Eliza Gilkyson’s new record. That word is spiritual. But let’s not leave it there as it’s a collection of songs that deserves more than a one word review. 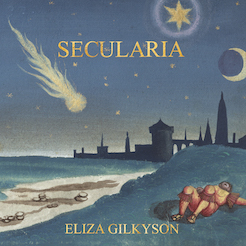 It’s a record that owes lots to family and friends as Gilkyson contemplates the world around her and what it means to us all. Born into a highly creative family, it’s not surprising that the opening track, ‘Solitary Singer’ has words from the poetry of her grandmother, Phoebe Gilkyson, and music from her father, Terry. Contemplative of the world of the songwriter and drawing parallels with the plaintive nature of birdsong, it’s a gorgeous way to start this collection.

Whilst her frustration with traditional religion is to the fore on ‘In The Name Of The Lord’, she dips into Psalm 23 for inspiration with ‘Sanctuary’ where she duets with gospel singer Sam Butler seeking solace from a spiritual love rather than God. It’s a recurring theme on the record with Gilkyson seeking some form of consolation from an increasingly frustrating world whether those frustrations come from personal experience or observing that of others like the tales of fleeing migrants you’ll hear on ‘Reunion’.

She duets with Shawn Colvin on ‘Conservation’ another song adapted from the work of her grandmother whose view on life and death sounds like that of her granddaughter. However, moments of facing the end of life are at their most visceral when she’s joined by long time friend Jimmy LaFave on the traditional song ‘Down By The Riverside’. A song they recorded together just a few months before he passed away after a fight with a rare form of cancer.

Not quite the title track, ‘Seculare’ is a song that gives thanks for all that nature gives to us as well as the ups and downs of life that come along. Its angelic chorus glides along with this simple message in what is one of the most soulful songs on the record. It captures the essence of the record, one of the most beautiful open hearted albums of the year. Go and get yourself some.