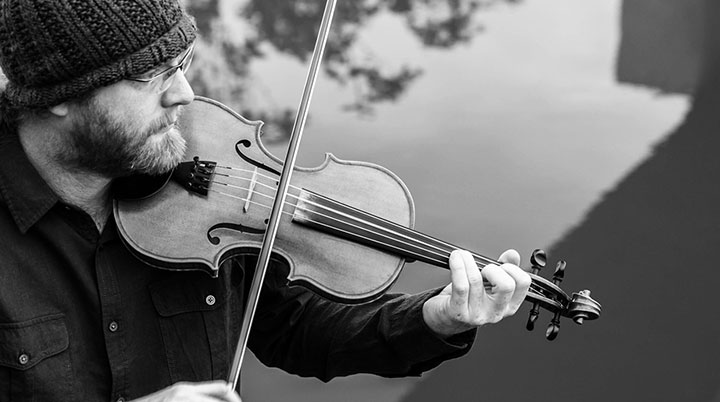 Most well-travelled musicians get limited time to linger as they go from gig to gig. Whilst a tour itinerary may look appealing to the casual observer, there’s little time to absorb the character or characters of the locations en route. With this in mind, fiddler Tom Kitching set about a journey that had him busking his way all over England and recording his experiences in a series of blogs as he went along. Having accumulated this resource, he found himself in a position to not only write the book, ‘Seasons Of Change’ (sub-titled Busking England), but also record an album with the same title. The latter gathering up some of the tunes that entertained the shoppers and other passers-by on the streets of England.

Of course, it’s not a book about music as such, or even a review of Kitching’s musical performances. He makes observations about what he finds whether on days when he busks or at times when he’s travelling across the country. It’s mostly about his accidental encounters though, occasionally, he makes specific visits such as to the museum in Darlington where there is the ‘Derwent’ railway engine built by Kitching’s ancestors. It’s a compelling read in the style of Bill Bryson’s ‘Notes From A Small Island’ and takes its cue from Englishness in the current times rather than unearthing some of the idiosyncrasies of the country. Educational and entertaining at the same time, it reveals the life surrounding a life on the English road.

The accompanying recording was laid down ‘live’ in Danebridge Methodist Chapel and catches the frisson of live music as a result. My personal musical choices lean towards songs but the fifty-four minutes of instrumental tunes on the ‘Seasons Of Change’ record offers music that is enough to stop any passer-by in their tracks. Driving along the tunes as much as his fiddle dances across them, Kitching is found dovetailed with Marit Fält who provides an empathetic rhythm on Nordic mandola and cittern. Blending self-penned material with jigs, polkas, reels and so on from the folk tradition proves to be a winning formula as the record fair fizzes along offering a background to reading the book or just sitting back to listen.

In this day and age, having a few artistic pots to boil is one of the skills required for thriving in the music business. For some, this means having themed projects that often involve collaboration with other musicians. Tom Kitching has turned this collaborative approach upside down into a largely self-driven approach that not only charts England from its many perspectives but also reveals that he’s as good a writer as he is a fiddler. A most enjoyable read with an exquisite soundtrack for the reader – worth buying both the book and record together.