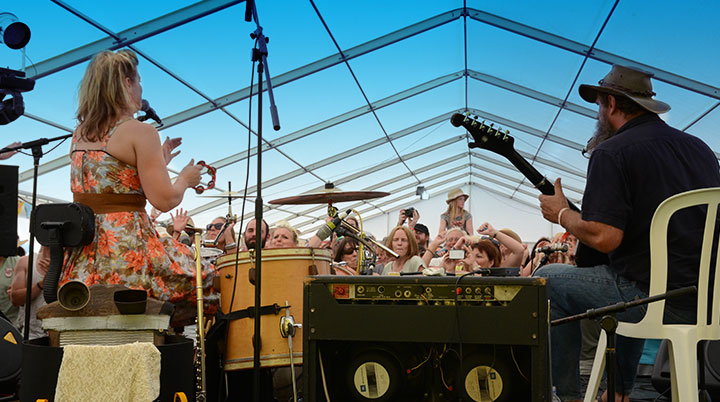 The organisers of Sark Folk Festival have announced the dates for next years festival, 5th to the 7th July 2019. This comes after the festival took a year out in 2018 for a breather. The success of this little festival took everyone by surprise as soon as it left the starting blocks, not least the committee who had the added logistics of getting equipment and people to the tiny island every year.

A little bit of something to brighten up your day, your month and maybe even your year…

We can now confirm publicly that the Sark Folk Festival will return next year, taking place from the 5th to the 7th July 2019!

We are incredibly excited, having taking a year off to regroup and re-energise, to bring back folk and roots music to the beautiful island of Sark.

Simon Harvey, founder of the festival, will be standing down as Chairman. After his years of dedication, Simon has decided it is the right time to hand on to a successor, although he will still be involved and will remain as a committee member. The committee would like to publicly thank Simon for the sheer volume of work and time he has put in over the past eight years.

As a reflection of the huge amount of work Simon put in, two new roles have been made to fill the gap he leaves behind. Josh de Kooker will take on the role of Chairman, taking overall responsibility for the planning of the festival through the year. Paul Le Huray will take on the role of Festival Director, responsible for the operation of the festival over the weekend. Josh and Paul have both been heavily involved in previous festivals and bring a wealth of knowledge and experience to their new roles.

Further announcements about 2019 will be made in due course.

Best of luck to them all and we’re looking forward to hearing the first line up announcements!