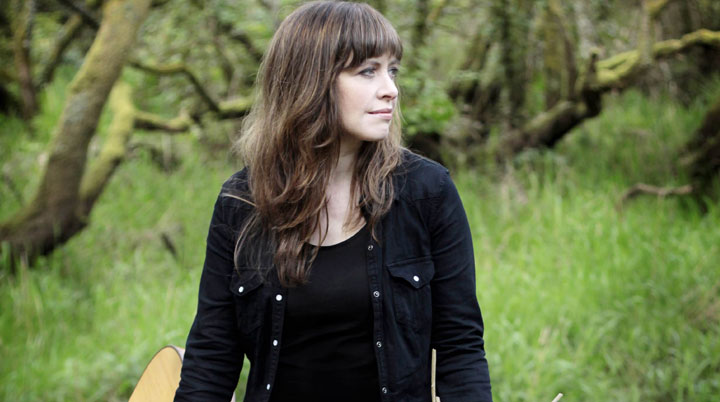 UK-based singer/songwriter Sarah McQuaid releases her fifth solo album, If We Dig Any Deeper It Could Get Dangerous, on Friday 2nd February 2018. Produced by guitar icon Michael Chapman, the album is distributed worldwide by Proper on LP (heavyweight vinyl in gatefold sleeve) as well as CD, and is being promoted with 2018 tours in the UK, Ireland, Netherlands, Germany and the USA. Sarah hopes to expand her touring reach into more countries next year.

A video of the first single from the new album, “The Tug of the Moon”, filmed and directed by Mawgan Lewis of Cornwall-based Purple Knif Productions, is available on YouTube

Lewis is currently at work on a documentary video about the album, featuring recording studio footage and interviews with both Chapman and McQuaid, to be released later this month.

Produced by legendary singer-songwriter and guitar sage Michael Chapman, If We Dig Any Deeper It Could Get Dangerous is the fifth solo album by UK-based singer/songwriter Sarah McQuaid.

Musings on mortality dominate this recording, but it’s by no means all gloom: “Break Me Down” is possibly the cheeriest song ever written about decomposition, while “One Sparrow Down” (backed not by Sarah’s trademark DADGAD-tuned guitar but rather by a battery of unorthodox percussion instruments including wine bottle and oven grill) takes a similarly upbeat approach to the death of a bird hell-bent on attacking its own reflection, unseen by the predatory cat calmly watching from her perch on the windowsill. In the liner notes for the album, Sarah thanks her cat Nightshine for contributing guest vocals to the track, and apologises to her for the implicit metaphor.

A cover of Jeff Wayne’s melancholy “Forever Autumn” leads into an arrangement for voice and guitar of “Dies Irae”, the medieval chant whose melody is echoed not only in Wayne’s intro to his classic War Of The Worlds number but also in countless film soundtrack themes (The Exorcist, The Shining and Citizen Kane, to name a few). Here as elsewhere on the album, McQuaid’s guitar shines on an equal basis with her velvet-textured voice.

Indeed, two of the tracks are purely instrumental: “New Beginnings”, written as a wedding march for former pop star Zoë Pollock of “Sunshine On A Rainy Day” fame (with whom Sarah recorded the album Crow Coyote Buffalo under the band name Mama), and “The Day Of Wrath, That Day”, whose title is a literal translation of the first line in “Dies Irae”.

The propulsive, apocalyptic title track was inspired by a warning McQuaid heard herself giving her son as he excavated an enormous hole in their back garden. There’s an obvious allusion to fracking (“Splitting cracks in the rock to free the power inside”), but the song’s thematic scope extends well beyond that: “Sometimes the way to fix a problem is to turn the pressure off” is a maxim that could apply to virtually any aspect of life.

On four of the tracks, including lead single “The Tug Of The Moon”, McQuaid plays an electric guitar belonging to Chapman, which he’s since given her on long-term loan. “The precision and sophistication of the writing and playing blows me away. I am so glad to be involved,” he writes in his introduction to the album booklet.

Since meeting Sarah when both artists played the Village Pump Festival in 2014, Chapman has become a staunch friend and supporter, even performing as her opening act at a local concert he and his wife arranged for her. Sarah became a regular visitor to the Chapmans’ farmhouse in Cumbria, and during one visit he made her an offer she couldn’t refuse: “We were having a chat and a glass of wine, and he said ‘Why don’t you let me produce your next album?’,” Sarah recalls. “I’m glad he said it, because I’d never have dared ask otherwise!”

Another new addition is piano, which McQuaid plays to beautiful effect on “The Silence Above Us”. Guest musicians include Chapman on archtop electric guitar, Roger Luxton on drums and percussion, Samuel Hollis on upright and electric bass, Richard Evans on trumpet, Georgia Ellery on violin and Joe Pritchard on cello.

If We Dig Any Deeper It Could Get Dangerous was made possible thanks to financial support from Arts Council England Grants For The Arts, using public money from the Government and the National Lottery, and from Cultivator, which is funded by the European Regional Development Fund, the European Social Fund, Arts Council England and Cornwall Council.

The album will be launched with a concert at the Acorn arts centre in Sarah’s adopted hometown of Penzance on Thursday, 25 January, following which she’ll be touring it extensively in the UK, Ireland, the Netherlands, Germany and the USA. In 2019 she hopes to extend her touring range into Canada, Australia and New Zealand amongst other countries.