“Playing that over Richard Howard’s grave was incredibly emotional,” says Sam. “We were all just stood there, sobbing. He was unknown, no one knew anything about him, no one would ever have visited his grave, ever, and all of a sudden, there I was, playing his fiddle to him. And there’s going to be a march every year to his grave, and people are laying flowers there. It’s amazing.” 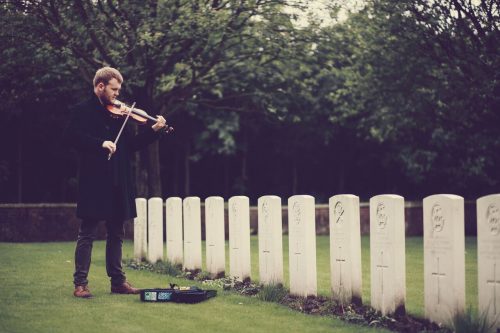 A veteran of the mighty Bellowhead’s domination of British folk for ten years, artistic director of the National Folk Youth Ensemble, founder member of the acclaimed instrumental trio Leveret, and a superb instrumentalist at the forefront of the revival in English traditional music, Sam Sweeney has signed with Island Records to release his first solo album, The Unfinished Violin, an expansion and development of his acclaimed live show, Sam Sweeney’s Fiddle: Made In The Great War, which toured to great acclaim from 2014 to last year.

The show centred on a fiddle the 19-year-old Sweeney came across in violin maker Roger Claridge’s shop in Oxford, made but not assembled by one Richard S Howard of Harehills, Leeds, in 1915. Claridge had come by it at auction, in pieces, in an old manila envelope, and put it together and put it on sale. It’s the instrument Sweeney has used for numerous albums and countless gigs, and in time he set about digging into its history, and uncovered the fateful tale of Richard Howard, a music hall performer called up in 1916 to the Duke of Wellington’s West Riding Regiment to fight and lose his life in the Battle of Messines on 7th June 1917. 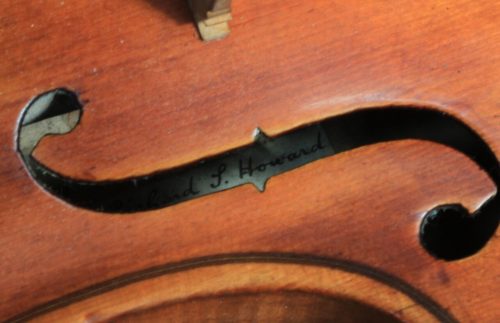 Last summer, Sam visited the battlefield. “They had arranged a Richard Howard walk, and we visited loads of important sites connected with the Battle of Messines. There were about 100 people with us and we ended up at his grave. His granddaughter read a poem, I played the fiddle, and a bugle player played The Last Post.” The tune he played, from Howard’s regiment, was the beautifully mournful The Wellesley, which is also one of the outstanding 16 tracks on The Unfinished Violin. The Wellesley, with its swelling melodies and stately rhythm was the march Richard Howard himself would have heard as a recruit to the Duke of Wellington’s regiment. “Playing that over Richard Howard’s grave was incredibly emotional,” says Sam. “We were all just stood there, sobbing. He was unknown, no one knew anything about him, no one would ever have visited his grave, ever, and all of a sudden, there I was, playing his fiddle to him. And there’s going to be a march every year to his grave, and people are laying flowers there. It’s amazing.” 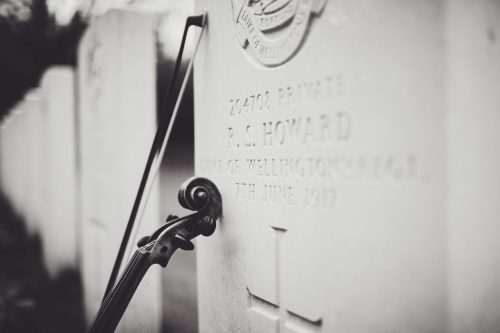 Since joining Bellowhead as a teenager, Sam rapidly established himself as one of the great instrumentalists in contemporary folk. The Bellowhead call came just as he was starting at university. “I did the folk degree for just 17 days,” he says. “ I knew that all I wanted to do was play the fiddle for a living and I knew I didn’t really want to go to university, and then I got offered my first Bellowhead tour, which was during Freshers’ Week, and I was told I wasn’t allowed to go, so I ignored them and went anyway.” He laughs. “And then I left the university 17 days later and joined Bellowhead full time.”

Alongside Bellowhead duties, he’s also released two fine albums with Hannah James, appeared on albums and stages with the likes of Eliza Carthy, Fay Hield and Sam Carter, been a part of the acclaimed Full English project, won the 2015 BBC Radio 2 Folk Award for Musician of the Year, and since 2014 has toured and recorded with Rob Harbron and Andy Cutting as Leveret. He is currently touring with Jon Boden’s, Remnant Kings….playing drums!

Rob Harbron, along with guitarist Jack Rutter, pianist Becky Price, double bassist Ben Nicholls and a brass and string section, appear with Sam on The Unfinished Violin. It’s apt that the last recording sessions were at erstwhile Island stablemates Fairport Convention’s studio in Oxfordshire, underlining the label’s rich history in supporting British folk. Sam signed to the label following an appearance on Radio Four, to talk about Made In The Great War. Island Records subsequently invited Sam to create an album of the kind of music Richard Howard’s violin would have played had it been assembled at the time of its making. “I said, give me a few days to think about it, because I really didn’t want to create a jingoistic, patriotic album,” he says, “but after some research, it was very clear that there would be loads of great tunes, and great stories.”

The opening track, Highland Soldier, was collected in Sussex by the composer George Butterworth – who died in the Battle of the Somme aged just 31 – and possesses a stately melancholy that’s also a statement of intent for the whole album, the poetry and the pity of war evoked through the strings and resonant chamber of Sweeney’s First World War fiddle. It’s easy to hear the Irish lilt in St Patrick’s Day, a march for the Irish Guards that follows it, paired with a tune collected all over England, Ireland and Scotland, Young May Moon, which comes with subtle support from a piano and Rob Harbron’s English concertina.

Elsewhere, it’s Sweeney’s solo fiddle that dominates, as it should, with Jack Rutter’s acoustic guitar providing rhythmic support on The Girl I Left Behind Me, while a larger ensemble adds subtle, understated support to Sad Am I, a Scots tune composed in 1918 by one of the founding members of the Scottish Piper’s Association, Iain MacPherson. It’s one of four tunes, including The Shell That Shook the Billet, The Battle of the Somme and the last track, Lament, that come from a book called Pipes of War, all written by pipe majors in the First World War. “A lot of them probably haven’t been played since then,” says Sam, “but I like the idea that some of these tunes were being played at that time, and that people like Richard Howard would have heard them or indeed played them.” Indeed, it’s striking that the likes of The Girl I left Behind Me, a popular dance put to military use, were just the kind of tunes Richard Howard might have played on Sam Sweeney’s fiddle, had it been assembled a century earlier, and taken out onto the stage of the Leeds City Varieties, rather than in Roger Claridge’s shop in the first decade of the 21st century.

As well as music that would have been made or heard in the British trenches, Sam set out to include tunes from beyond Britain’s borders – from Belgium, France, and Germany. The problem he had was that most European marches were drawn not from folk sources but the classical and operatic repertoire. The first section of Be Gone Dull Care is an exception. Lockmarsch is performed before a regimental march, and is paired with an English marching tune that can be found in Playford’s Musical Companion from the 17th century. “All these tunes have been claimed by the war and have associations with the war, but all existed long before it, and they are just tunes. And that weird German march is a great fiddle tune.”

Eventide, the album’s penultimate track, includes a second German song, Der Gute Kamarad. “It’s a funeral march still used by the German army, but before that it was a traditional Swiss waltz,” says Sam. He also sees it as a good example of how tunes adapt themselves to changing conditions. “There’s no claiming tunes,” he says. “Tunes don’t carry passports. It’s just a melody. And that ties into the title of the album, The Unfinished Violin. All these tunes are unfinished, they are not done. They may have been claimed at one point, but they’re not military tunes forever. They’re melodies and melodies can be beautiful things. Their ownership is never settled.”

Der Gute Kamarad is paired with Eventide by William Monk, still used at military funerals and remembrance services, and whose tune was used for the hymn Abide With Me, which British soldiers are known to have sung in the trenches, and it’s followed by the sombre beauties of Lament, the album’s closer, just Sweeney with his fiddle, and Becky Price on piano, and us, the listeners, drawn, like Sweeney, up close and personal with the humanity and epic human story resident in that unique fiddle’s resonance chamber.

Here is a video to let Sam explain why he made the album and the inspiration this very special violin has given to him….

“It’s the finest, most moving tribute I’ve yet heard paid to the life of an individual soldier.” Verity Sharp, BBC Radio