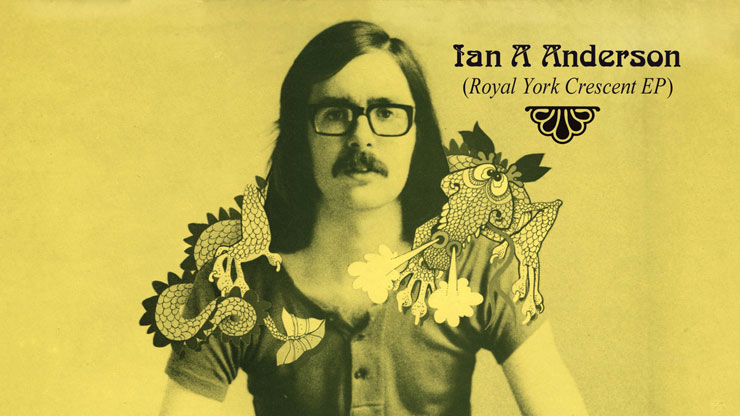 Fifty one years ago the folk boom was booming, especially in Bristol, where a fresh faced, long haired, floppy hat wearing country blues guitarist started a label, “ to be to contemporary folk what Trailer Records was to the traditionalists.” That hat and the guitar belonged to Ian A. Anderson, a total enthusiast and dynamo for roots music. His label was the legendary Village Thing Records, named after Clifton Village a bohemian area in the city where all kinds of musicians, artists and writers lived or hung out.

The third release on Village Thing was his own solo album ‘Royal York Crescent,’ from which this four track item is sourced, two takes are instrumental and two are songs. Simply presented it’s just Ian and his bluesy acoustic with Ian Hunt adding his strings to ‘Hero,’ and bongos with bass also in the mix.

Yes, the tracks are of their time but each has something about them that still echoes relevance today be that the tarnished individual who runs through the core of ‘Hero,’ be careful who you look up to or the huge question of how appropriate or useful education actually is. ‘ Shining Grey’ whose lyric runs “ droning nine to five every day.” We can all relate to that.

Coming with some wonderful associated ephemera photos, artwork, lyric sheet and wrap round advertising reproduction, this is a great way to celebrate the anniversary. Ian of course went on to further adventures as part of Hot Vultures, later publishing a well-loved/much respected folk magazine for over four decades. Some of us show his influence still in whatever we write. Seek him and this out. A super commemoration of quality and resonance.