Rowan Rheingans is a fiddle player, banjoist and songwriter widely regarded as one of the foremost innovators in folk music today.  Best known for her work with acclaimed bands Lady Maisery, The Rheingans Sisters and Songs of Separation, Rowan has won two BBC Radio 2 Folk Awards and is a five-times nominee.

In June this year, Rowan will premiere her ambitious and deeply personal one-woman show Dispatches on the Red Dress in a 10-date tour across the country. In what could prove to be a career-shifting year, Rowan will also perform the show in a two week run at the prestigious Edinburgh International Festival In August, before releasing her first album, a companion to the show with support form the PRS Women Make Music and Arts Council England.

In the current time of deeply felt political tensions, with the rise of racism in our communities and a new nationalistic fervour gaining pace across Europe, Dispatches on the Red Dress is a highly resonant and much needed historic provocation for our current political and social climate. Slowly revealing what is at once a warm family story and a troubling elegy on the modern human condition, Rowan explores how hope for the future may be found in the very darkest pockets of our history…

As well as being a heartfelt yet unflinching anti-war and anti-fascist statement, the show is also an uplifting celebration of small acts of everyday resistance, speaking directly to the human capabilities of transformation and change.  It is Rowan’s most courageous, most political and most personal work to date.

Having taken over two years to write it, Rowan says:  “This is not just a memoir or a show about my grandparents, or even a show about history or war… I’ve been writing this material very much directly from my fears and worries about the world now. I think of it as a musical essay, about how horror and beauty co-exist and about the dangers of forgetting or indeed ‘mis-remembering’ difficult periods of history. I hope sharing this particular story from my own family will spur conversations about how we can resist the rise of the far right in constructive, supportive, creative ways. This is about the peace-making potential of stories”

Developed in collaboration with Liam Hurley (Karine Polwart’s Wind Resistance) the live
show brings the intimacy of a folk concert to meet the ancient traditions of storytelling and texture of contemporary theatre in a troubling, tender and powerful performance.

At selected shows in June, Rowan will be hosting post-show discussions in collaboration
with local academics, activists ,educators and artists engaged in peace-making work
relating to the themes of the show. 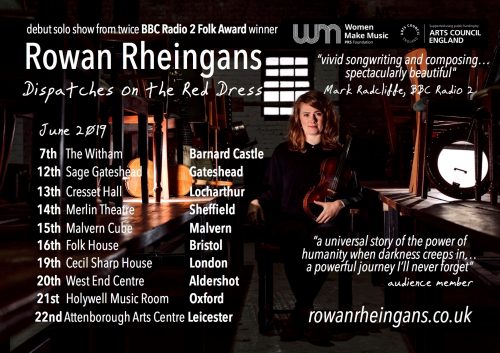 Rowan’s debut solo album, The Lines We Draw Together is due for release later on in the Summer, so start saving your pennies !!