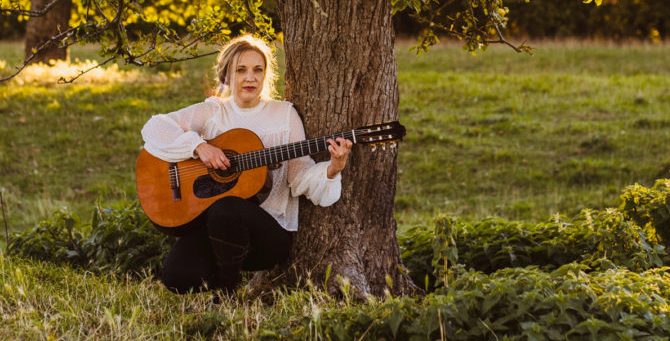 Rowan Godel is a singer and songwriter also working with traditional song, creating her own fresh and unique sound. She has recorded and toured with a number of highly regarded artists on the UK folk scene, such as folk rock legends the Levellers and Oysterband and in 2016, she released her debut EP, ‘September Skies‘.

Rowan has worked in many genres of music and there are influences here from beyond the folk world, which she, along with music producer, Al Scott, incorporate with a sense of delightful curiosity. She has a fondness for vocal harmony arrangement, which is clearly evident on several tracks from the album. Her writing is sometimes honest and direct, sometimes poetic and lyrical, conjuring up images of landscape and nature. She also has a talent for story telling, as heard  in her song ‘Lily’, the story of a young girl who has been made homeless. Several of her own compositions have been awarded finalist and semi-finalist positions in the UK songwriting contest in recent years.

Rowan is joined on the album by a host of fantastic and notable musicians from the UK folk scene, including multi instrumentalist Benji Kirkpatrick (Steeleye Span, Bellowhead, Faustus) and fiddle player, Tim Cotterell (Nick Burbridge, Martha Tilston). Combined with the imaginative production skills of Al Scott, the result is an album well worth waiting for!

She has a growing number of loyal supporters, many of whom have contributed to the making of this album, which was successfully crowdfunded.

“Rowan is simply one of the best singers I have ever worked with.”

To launch the album, Rowan is excited to announce that she will be touring the UK in March, with Benji Kirkpatrick and Tim Cotterell as The Rowan Godel Trio.