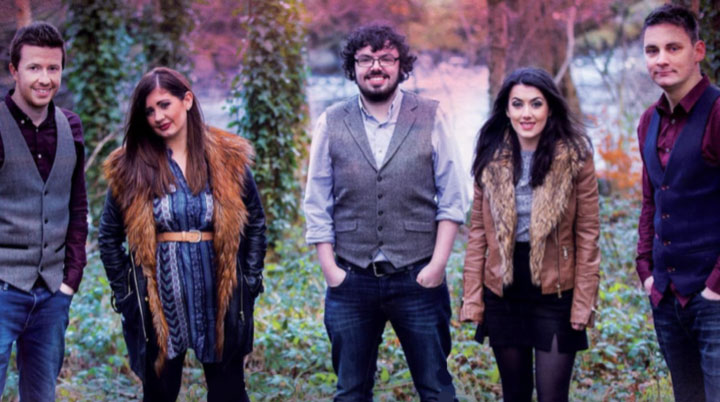 Those who contributed to Northern Irish band Connla’s Kickstarter campaign to record their debut album “River Waiting” will not be disappointed. This vibrant young band have produced an excellent set of self-penned songs and tunes, along with a few traditional and well-loved classics. Each band member has contributed original material to the album, creating an excellent debut that is original, ethereal and exuberant.

Hailing from Armagh and Derry, Connla met whilst studying Music at Ulster University and they have got playing together down to a seriously fine art; on Emer Mallon’s instrumental ‘The Enchanted’, Mallon’s harp and Paul Starrett’s guitar blend together seamlessly before the rest of the band sends the piece soaring; in Ciaran Carlin’s ‘Blue Lagoon’, Connor Mallon and Ciaran Carlin’s duet of whistles will bring joy to the very hardest of hearts. If that wasn’t enough, their song writing confidently holds its own amongst the excellent musicianship; Ciara McCafferty’s ‘Moon and Stars’ and Cafferty and Starrett’s ‘River Waiting’ have an contemporary and reflective feel to them, with McCafferty’s vocals adding depth, dimension and impact.

Included too is the traditional song ‘Daily Growing’, a refreshingly fast-paced, energetic and exuberantly Irish interpretation of a well-known favourite. So too is Mary Dillon’s ‘The Boatman’, and David Francey’s ‘Saints and Sinners’, brought to vibrant life by McCafferty.

Connla recently picked up the Best New Group award at this year’s Live Ireland Awards and are gathering a big following in Europe and the USA, and their debut album is testament to this much deserved recognition. This is Irish music at its most refreshing, accomplished and original best.