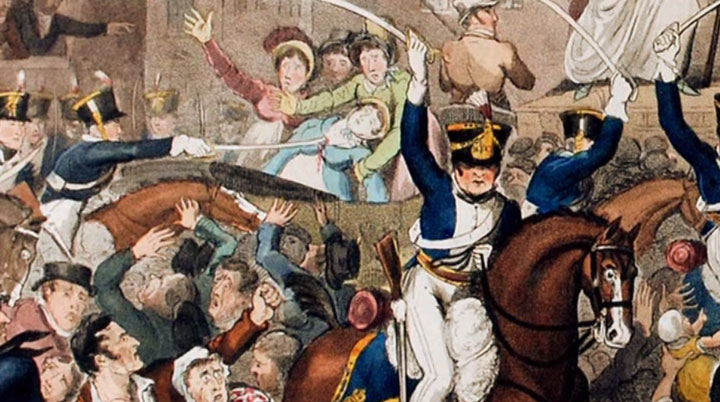 In 1819, the concept of freedom of speech, protest and democracy were tested dramatically when armed soldiers charged at peaceful protesters. Two centuries on this new commission tells the personal stories of two women linked across time and through experience as they struggle to rise up and find their voice.

In 1819 one of the bloodiest and most defining moments in our history took place in the centre of Manchester. A peaceful mass meeting of some 60,000 working people, no longer prepared to suffer poverty and discrimination, was turned into a massacre by a fearful ruling class. Fast forward nearly 200 years and Rising Up asks do many people in Britain still consider themselves as distanced from Government and the new ruling classes as those of early 19th century Britain? What might those orators, poets and community leaders have said about society today?

Rising Up is a unique, creative folk music and theatre project to mark the bicentenary of the Peterloo Massacre and considers the conditions that led to this incident.

The folk song tradition has for many centuries been a key device in documenting national and international events, generating awareness of social injustices and as well as the joys,  trials and tribulations of the working classes. Wherever people have felt injustice, hardship and lack of representation, they have turned to culture; and frequently song. This is as true today as it was in 1819.

There are many examples in the UK folk music tradition, sometimes centuries old, of reflecting the experiences of people, places and events through song. A few of the more recent examples include Ewan MacColl’s The Manchester Rambler (about the mass trespass of Kinder Scout) ; Charles Parker’s Radio Ballads (for the BBC commissioned series of songs about working people – railway men, miners and fishermen amongst them); Peter Bellamy’s The Transports, the folk ballad opera about prisoner transportation; Leon Rossleson’s Palaces of Gold (about the Aberfan disaster); the English Folk Dance & Song Society’s Sweet Liberties project (marking 800 years of democratic movements) and The Young Un’s recent recording and stage show, The Ballad of Johnny Longstaff (the story of one man’s remarkable journey from begging on the streets in the North of England to fighting against fascism in the Spanish Civil War and The Cable Street Riots).

Debs Newbold is a fast-rising star of theatre and storytelling, from the Midlands but now based in London and West Yorkshire. She is an actor, director and performance storyteller working across a range of theatre forms, displaying a love of work that playfully and powerfully explores performer-audience relationships, creating engaging, thoughtful and stirring work, where she brilliantly manages a delicate balance of placing the poetic, alongside the irreverent.

Sean Cooney is best known for being one third of the acclaimed Teesside trio, The Young ‘Uns. Stockton Folk Club’s star graduates clinched the BBC Radio 2 Folk Awards ‘Best Group’ title two years running before spreading their wings and taking their entrancing harmonies, razor sharp wit and powerful songs around the UK and more recently, Canada, America and Australia too. Cooney is highly regarded for an ability beyond his years to turn the spotlight on injustice, while all the time celebrating the indomitable human spirit.