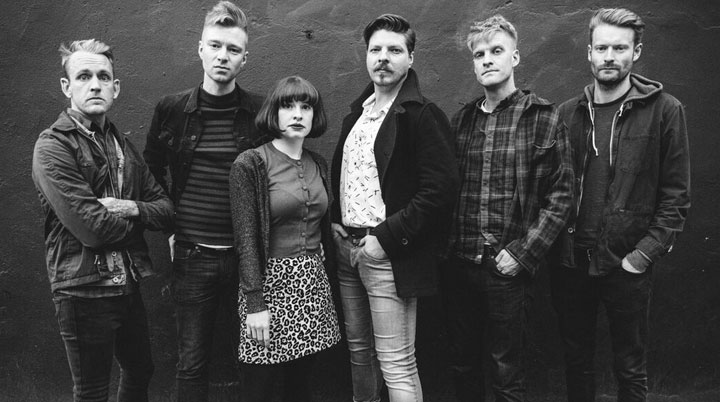 London-based folk punks SKINNY LISTER are proud to announce a brand new single ‘Thing Like That’, a politically charged track taken from their recently released double-album version of their third critically acclaimed full-length, The Devil, The Heart & The Fight.

The track is a response to recent political events in both the UK and US, which have proved difficult to ignore, even for a usually non-political band. The discourse created by the likes of Brexit and Trump course through the veins of this blistering rant of a track which flashes by in an exhilarating 2 minute dash. ‘Thing Like That’ along with ‘Christmas Calls’, a song inspired by The Pogues’ classic ‘Fairy Tale Of New York’, led the second CD of the new package before treating the listener to the frenetic energy of their live performances from the band’s biggest sold out London show to date at the Scala, and from the Roundhouse during Frank Turner’s Lost Evenings Festival both in May 2017.

Following a headline tour across the US with support from esteemed label-mate Will Varley, Skinny Lister will be returning to Europe for a tour across Germany in May, plus selection of festival appearances including Cursus Festival (UK), Download (France), Mighty Sounds (Czech Republic) and more.

If their folk debut album (Forge & Flagon, 2012) celebrated the sticks and their punkier second (Down On Deptford Broadway, 2015) blinked in the bright lights of London; their rocked-up third, The Devil, The Heart & The Fight sees Skinny Lister going global. Pieced together while on the road, and recorded over five weeks in Newcastle Under Lyme’s Silk Mill Studio with producer Tristan Ivemy (Frank Turner, The Holloways), it is Skinny Lister’s most far-reaching, exciting and accomplished album yet. It’s a full-on rock record that splashes even more punk vigour and eighties pop elements across their fervent folk canvas, taking in hints of Adam Ant and The Clash. The Devil, The Heart & The Fight is like Skinny’s previous albums gone backpacking; expanding its horizons, full of adventure, discovering itself and doing things it regrets in the morning. Have heart, ye devils, join the fight.

Skinny Lister will be touring the U.S. with label-mate Will Varley supporting on all dates, before returning to Europe for the following appearances.

“Skinny Lister knows how to have a good time. Throughout their performances, there are various Celtic references, acoustic instrumentation and a ton of fun. It’s a kind of show where you need to hold onto your bootstraps.” – Noisey

“…a visceral and deafening experience.” – The Independent

For more information and ticket bookings check out their website  http://skinnylister.com/