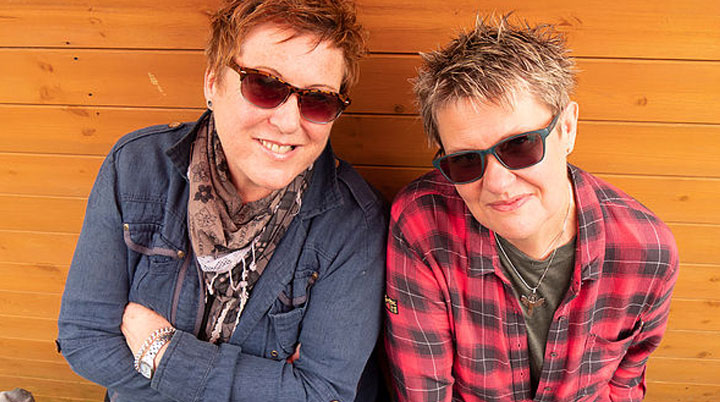 With a nod in the direction of Banksy, Chris While and Julie Matthews deliver again on a set which is their strongest in many a moon, amplified by the fact underneath all the calm there flows a river of anger, frustration and fire, balanced by ever present compassion. Hasn’t it always been so? From the time they began scheming whilst members of The Albion Band to 2019 – whisper the fact it’s their 25th anniversary as a duo – While and Matthews have maintained a rebellious streak which sought to rewrite the status quo and the accepted whilst presenting those ideals through music and smart writing which appeals across generations and genres. To many they are Chris and Julie and they empower a considerable number.

Off the top of my head I make this their eleventh album, apologies if the numbering’s off, it’s mix of human life, human frailty, human mistakes and out and out bolshiness over politics is spot on. They have the canny, welcome knack of singing what the more sane amongst us are thinking and probably mutter into the cornflakes as we read the morning papers or catch the news. “I’ve stopped

saying anything,” a friend of mine recently observed “I don’t want to bore myself or throw things at the television!” Feel like that? Lots do. Here you’ll find if not answers, then at least support in getting your head around a world out of kilter. The title track opens and kicks against youth unemployment, poverty and the sheer folly of not investing in people, there’s potential within each of us the song seems to say, just give us the tools and we’ll prove it. Dead right! Ensuing ‘Landfill,’ is another of Julie’s finger on the pulse creations listing the environmental folly which plays out before our eyes endlessly, though her crowning moment comes with ‘Seven Seconds,’ an emotive and tender way of dealing with the loss of a loved one, in this case her mum, the way the piano and vocal work off one another shows symbiosis of a high level. ‘Black Dog,’ hints at the deep, dark hole of depression and reflects Nick Drake’s song of the same name though here love and caring pull through with a well meant “Thank God for you…” closing the lyric.

Chris While telescopes the more every day/unusual aspects, “ This House Upon The Hill,” mirrors the feelings every musician must feel coming home after weeks on the road, “ smiling faces cheer us as the miles roll along,” she sings, but there’s nothing better than being yourself and with those who you care for at the end of the day. The quirky ‘Two Halves Together,’ tells of cutting your house in half and moving it to a different and more desirable location. In this case Robert and Mary from down under, who having moved missed their neighbours so much persuaded them to do the same with their home! Really the song says as much about the character of its subjects as it does about their actions.

Some with cauliflowers for ears might call ‘Revolution Calls,’ folk music, the obsession with hanging tags on albums makes me so grumpy, for crying out loud this is great music, it’s melodic, tuneful, makes you feel better and sends a tingle down your spine! It’s While and Matthews, that’s enough. Supported by friends, long-time associates and family it was all recorded in their state of the art studio somewhere in the environs of South Yorkshire and never underestimate the fact that both girls are northern, the old punk DIY ethic has taken seed and these two do things properly. Expect to be entertained, While and Matthews never disappoint.