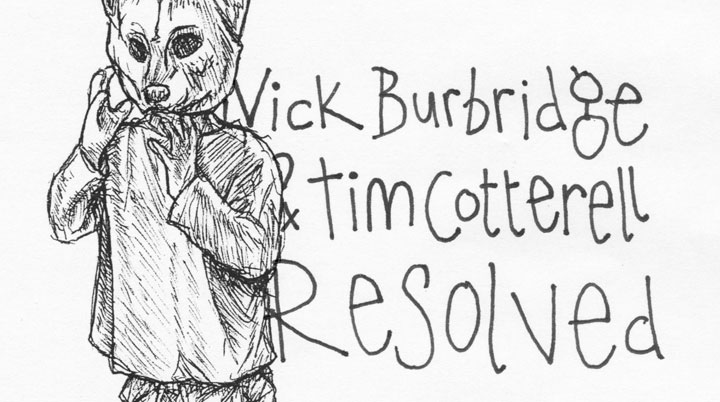 Nick Burbridge and Tim Cotterell’s last project – Gathered – received inspired reviews, and gained Nick the 2013 Spiral Earth Best Songwriter Award. It also found its way onto the AQA A Level Communication and Culture syllabus, the frontispiece of a book on Barthes, and formed the basis of an academic lecture at the University of Edinburgh!

But Gathered was not a cerebral album. Burbridge’s songs are set on the dark streets of the heart, whatever his philosophical intent, staking common ground where traditional and contemporary sounds merge effortlessly. When a songwriter of such lyrical and melodic strength combines forces with a multi-instrumentalist and producer of real calibre like Cotterell, moment and attack are bound to prove irresistible.

On Resolved this mutual craft reaches full potential – ten songs interspersed with sung tanka – where themes constantly engage and, as it unfolds, the sheer commitment involved speaks for itself. By the end of the recording, the listener feels as if they have been guided on a journey confronting all kinds of major personal and political challenges, whose true significance they only realise when it concludes.

Musically, varying from Dylan-type narratives, through ornamental ballads reminiscent of Dick Gaughan or Planxty, to a unique form Burbridge and Cotterell have made their own, where weathered and assertive voice and guitar weave in and out of subtly textured sound, the album achieves a coherence few others match.

It isn’t a swashbuckling live McDermott’s Two Hours record – the band which Burbridge formed and Cotterell joined – described by The Levellers, among others, as their main influence, which led them to collaborate many times in the studio and on stage, and cover McDermotts’ songs ‘Dirty Davey’ and ‘Prisoner’. It’s an album that decisively substantiates Burbridge’s credentials as a playwright, novelist, and, above all, poet, whose work has also been recorded by performers as diverse as the late Maggie Boyle and Ferocious Dog – and the breadth and sensitivity of Cotterell’s instrumental playing, employed by many from Oysterband’s John Jones to Martha Tilston.

Material considerations are few – the main concern is that these songs are heard and shared. For all those fRoots once described as ‘Burbridge’s footsoldiers’, who have followed him through various projects from the late eighties, to others who might be familiar only for his recent work with ‘rising star’ Cotterell, Resolved will prove what it purports to be: a fitting resolution. To those unacquainted, welcome. You will not be disappointed.