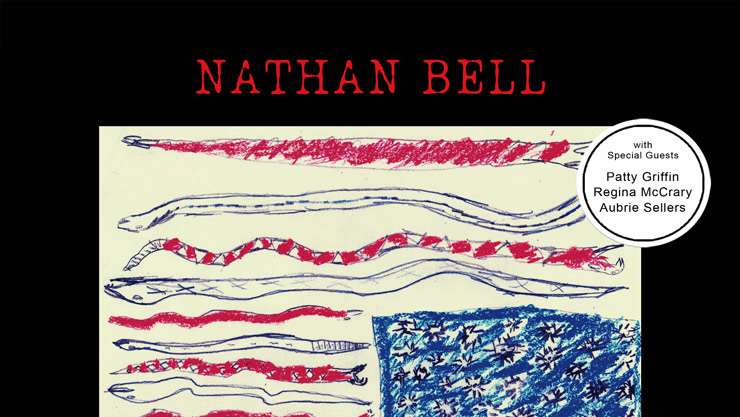 Back in 2018, a review for Spiral Earth suggested we should pay attention to Nathan Bell. The release of ‘Red, White And American Blues (It Couldn’t Happen Here)’ doesn’t change that perspective at all. It’s a collection of songs that holds a mirror up to life in America over recent times and it isn’t a pretty picture. Indeed, the despairing ‘It Couldn’t Happen Here’ of the album’s sub-title is a passing reference to a book with a similar name from 1935 by Sinclair Lewis about the potential for people to be led unwittingly into fascism.

Again, as the album’s title suggests, the blues features strongly on this collection whether in acoustic or electric format. Bell is joined by three outstanding female vocalists on the record. Most notable is Patty Griffin who appears on three tracks. ‘American Gun’, an examination of the central role of gun culture in the US. ‘A Lucky Man’ dedicated to Bell’s father in its lilting appreciation of recognising the good things in life and the love song with a dark undercurrent, ‘To Each Of Us (A Shadow)’.

Aubrie Sellers adds a gospel vocal to the frustrated anger of ‘Running On The Razor’ as it looks at the lives lived on the edge by the poor in the US. And whilst such blues is a convenient way to set the mood for some difficult subject matter, the genre also comes to the fore on Bell’s tribute to Lightning Hopkins, ‘Retread Cadillac (Lightnin’)’ where Regina McCrary of The McCrary Sisters adds her vocal support. Reflecting on more of his own musical favourites, ‘American Blues’ gets dedicated to Gil Scott Heron whose archetypal funk and cataloguing of American social ills are brought to life for 2021 on this centrepiece to the album.

Previous releases from Nathan Bell have looked at the restorative support of family and community but this new record follows a bleaker musical path. Don’t be concerned. Whilst ‘Red, White And American Blues (It Couldn’t Happen Here)’ is a hard hitting consideration of American society today, Nathan Bell continues to wear his heart on his considerable musical sleeve.