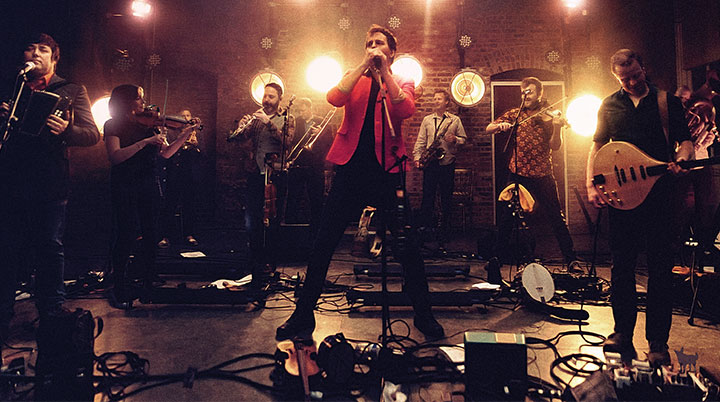 Artists have always been creative, and the pandemic has led them down all kinds of paths to creatively generate income. Whether a first or not, ‘Reassembled’ is a recording of Bellowhead’s live streamed performance from Stabal Mansion in December 2020. Its 74 minutes and 17 tracks ticking the value for money box straightaway as well as it being a record of this brief reunion of Bellowhead. By the way, at the time of writing, the original stream of the show was still available to watch online.

The tracks represent a collection of live favourites and, in that sense, captures the finest moments of this much missed juggernaut of a band in their ‘natural’ home. Blasting off with ‘Roll Alabama’, we’re reminded of the raucous riot of their shows and its impact on dance floors up and down the folk world. Driven by string and wind instruments intricately arranged to tickle the musical mind just as much as those dancing feet, we get treated to the punk energy of ‘Little Sally Rocket’, the romps that are ‘New York Gals’ and ‘London Town’ alongside a trip to the seaside in ‘Yarmouth Town’. There’s the supercharged shanty, ‘Haul Away’, the Brechtian theatricality of ‘Captain Wedderburn’ and the evergreen ‘Roll The Woodpile Down’ amongst the other tracks.

Whilst avid Bellowhead fans may already be in possession of the live recording from their farewell tour, ‘Reassembled’ shows that it’s clearly their habitat of preference where you’ll find the assembled musical powers remain undiminished. Of course, you may well have heard studio versions of these tracks too, but this uncluttered recording very much captures the true essence of the arrangements. Subtleties are allowed to emerge in the way that only live performance truly captures. Whilst the general absence of crowd noise throughout may seem slightly odd, you can add your own whooping and hollering to this live recording and stomp around the room for the full effect. In fact, it’ll be hard to stop this happening. Clear the dance floor everybody!