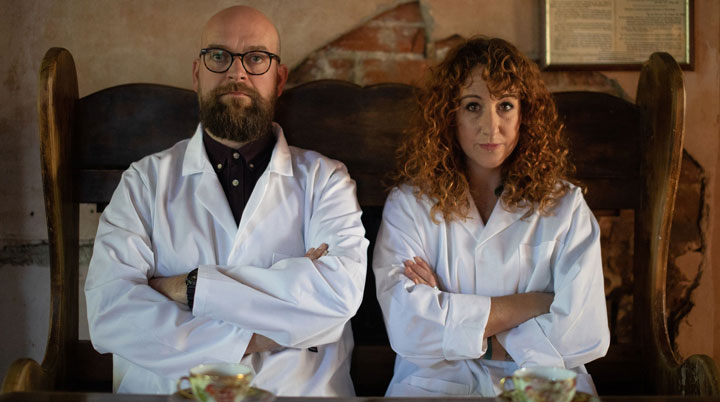 Encounters at songwriting retreats can be very productive and the pairing of Findlay Napier and Megan Henwood at Snape Maltings resulted in ‘The Story Song Scientists’ EP. The latter being a collection of songs taking inspiration from the widest view of scientific tales, theories and facts. Now, they’ve come up with a second EP, ‘Quantum Lyrics’, that has them donning their lab coats in the same guise and developing this unusual songwriting partnership.

The songs include the lead single, ‘Ode To The Man With The Golden Arm’ which is inspired by an individual estimated to have saved 2.5 million babies’ lives across his lifetime by donating blood plasma that strangely carried a rare antigen that was helpful to expectant mothers with the life threatening Rhesus Disease. Other songs include a tongue in cheek love story between virtual assistants Alexa and SIri, a reflection on ‘The Anarchist Cookbook’ and an appreciation of the benefits of clouds. All of which benefit from the meticulous research and songwriting of the duo as they explore different folk and blues styles.

Henwood’s solo work has involved an electronic flavour with synths and programming being used alongside more traditional instrumentation. So, there’s no surprise that this has spilled over into this second helping of story song science. Each of the five songs on the CD has an accompanying ‘specimen’ track that helps to explain the scientific inspiration for the song. Take, for example, the opening song ‘1800 And Froze To Death’ which explores the global effects of a cataclysmic volcanic eruption in Indonesia – no prizes for guessing the environmental parallels of today. This is preceded by a ‘specimen’ track, ‘Specimen 1: 1800 FTD’, which finds Napier reading an excerpt from Lord Byron’s poem ‘Darkness’ and features Henwood on synths and piano. This articulation of the inspiration behind the song is written by Henwood as are all the ‘specimen’ tracks but do note that these helpful and atmospheric compositions come with the CD only and not the online download. Something of an experiment to get exclusive bonus tracks on a CD as opposed to the online format!

It won’t have escaped your attention that this is a quirky record which may throw some more conservative listeners. Nevertheless, the devotion to their craft on ‘Quantum Lyrics’ means The Story Song Scientists offer up a successful experiment that will encourage listeners to follow the science.