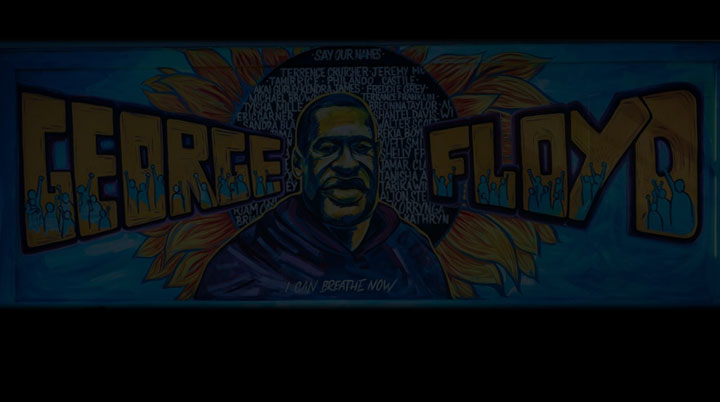 Though we may never truly understand what it is really like to live with systemic prejudice, abuse, persecution and violence, we have to state that it sickens us to our very core, that the values of love, respect and cooperation that we hold dear are not reflected by certain governments or those in authority.

The murder of George Floyd by a policeman whilst his colleagues looked on and did nothing for the victim is just another example of police racism and brutality. However it was such a shockingly brazen act of white arrogance that it appears a fuse has been lit.

There is a danger that these words are being written out of white guilt – Let’s face it, UK folk music is incredibly white and does little to be inclusive. We should feel guilty, if you look to history there is an awful lot to be ashamed of as a nation. An empire built on exploitation, invasion, slavery and greed. A sense of entitlement, superiority and power over others seems hard coded into our racial character. However, folk music has a rich tradition of protest, and by God we need to do that now.

What we can and must do is to educate ourselves, a definition of privilege is when you think something isn’t a problem because you aren’t affected personally. We can support those protesting in the US. Today (Tuesday 2 June); a large part of the music industry is participating in #TheShowMustBePaused, a day of silence for George Floyd.

We are sharing this information and donation resources as part of that.

Above all we need to keep talking about this. Racism, homophobia, prejudice, misogyny, hate and intolerance are on the rise around the world. We can’t look to our leaders or governments for guidance as they are often a part of the problem. Talk to your friends about it, ignorance is more than often at the root of prejudice, knowledge can shine a light into these dark places.

Bailout funds committed to paying for criminal bails and immigration bonds, aiming  to free protesters who are incarcerated.

George’s brother, Philonise Floyd has started a GoFundMe page where you can donate to the family’s funeral costs and further expenses such as grief counselling and expenses related to legal proceedings.You can also send letters of condolence and support or send cheques to:

The family has said ‘While we are not able to respond to each expression of love at this time, please know that we love and appreciate each and every one of you. Our hearts are overwhelmed!’.

Black Lives Matter are working hard to to end state-sanctioned violence and end white supremacy once and for all.

Stop Hate UK was set up after the murder of black teenager Stephen Lawrence in 1993, they help victims of racial harrasmment, Donate here.

Hope Not Hate is probably the pre-eminent anti-fascist campaigning organisation in the UK.

In the US
Contact the Minnesota elected representatives and demand action against those involved in George’s murdre
Color Of Change petition
Change.org petition

Outside the US:
Amnesty International petition
Change.org petition

Some books to read:

How To Be An Antiracist by Ibram X. Kendi