Hanging out at various folk festivals over the last year or two, I’ve noticed that there’s been a noticeable group of young revellers who seem to spend as much time watching and listening out front as they do performing on stage. From my occasional observation point in the bar, this might have been just a cheap excuse for them to pass through the excellent outlets for ale, cider and the like. However, the evidence of ‘Pretty Peggy’ is that there’s something more afoot here with Mr Kelly and his pals.

Sam Kelly emerged from the West Country with the Irish blood of his heritage feeding an interest in music that led to him being a finalist on ‘Britain’s Got Talent’. Whilst, personally, I would have found it difficult to successfully leave a TV green room full of animals performing tricks and people who spend too much time applying make-up, Kelly has taken it on board as more coal to fuel the fire of his talent. Not that he’s ignored other talented friends as the likes of Toby Shaer and Ciaran Algar are amongst The Lost Boys. 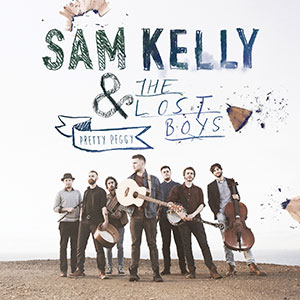 The striking effect of ‘Pretty Peggy’ is the subtle blending of four key elements. Folk tradition, singing and dancing opportunities with a massive pile of energy to boot. The songs are often the interpretation of the writing of others like on the delightfully gentle ‘The Rose’ where a translation from the original French lyrics closes out the album. More predictable, perhaps, are the interpretations of older songs using the ‘traditionally arranged’ approach such as the equally delightful ‘If I Were A Blackbird’ which was arranged by Kelly with Chris Wood.

Chris Wood isn’t the only well established folkie to add to the quality on show. Cara Dillon adds a vocal to ‘Bonny Lass of Fyvie’ alongside Michael McGoldrick with uilleann pipes. McGoldrick appears elsewhere as does Damien O’Kane on guitar and Geoff Lakeman pops up with spoons and vocals. Indeed, it’s the energetic style of Geoff’s son, Seth, that seems to have provided something of a jumping off point for The Lost Boys. Sometimes, this comes with an almighty singalong as with ‘The Keeper’ where feet will tap and bodies will sway in dance, for sure. Alternatively, ‘Greenland Whale’ sounds like Show of Hands asked Led Zeppelin to produce with its heavy beat and a fiddle solo that probably required buckets of water to douse its fire after recording

Let’s be frank. There’s a running conversation about how the older audiences of the more traditional folk music scene can become infused with a younger element. There is no shortage of young folk players to perform live and that steady flow seems set to continue as the opportunity to study folk music at college seems to expand every year. Yet, those who have managed to cross over from the folk clubs and arts centres to a younger audience are few and far between. It’s clear from ‘Pretty Peggy’ that Sam Kelly and his merry band of players seem set to challenge the paradigm that young music fans seeking to be ‘cool’ would never be seen at the same gig as their parents. His is a talent set to shine brighter.