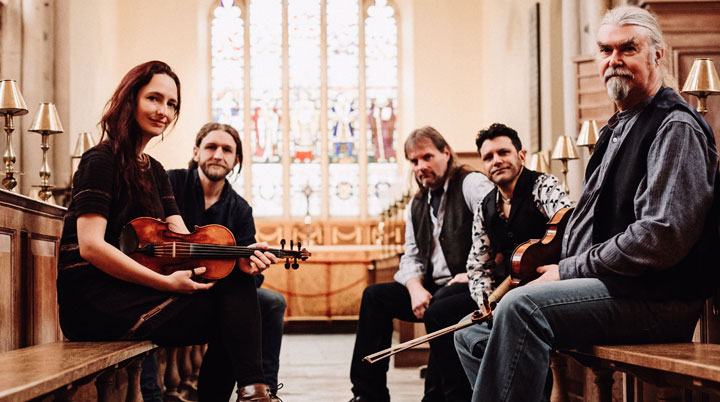 “Peter Knight can spin the world on his bow” so said no less a philosopher and writer than Sir Terry Pratchett, a man who knew what it was to invent a world…several actually.

Equally at home in diverse worlds/scenarios, Peter is a skilled practitioner who conjures and crafts aural images as well as contrasting soundscapes. His years of experience crossing boundaries and genres, means his music falls beyond categorisation and narrow thinking.

From beginnings in the rarefied halls of the Royal Academy to international stages the world over with Steeleye Span, gentle classical reflections in his solo offerings and work for the Shakespeare Birthplace Trust, there is nothing predictable about a musician whose music is as mercurial as quicksilver, absorbing, distinctive, enduring and above all fascinating” Simon Jones

In the wake of his departure from folk-rock pioneers Steeleye Span, Peter Knight turned his full attention to his trio Gigspanner, and in the process has established their reputation as one of the most genuinely groundbreaking forces on the British folk scene, inspiring Maverick magazine to write “Gigspanner are pushing at the boundaries, expanding the possibilities and in the process making some of the most beautiful music the genre has to offer”

Described as one of the “most quietly brilliant sets of musicians in the folk world and beyond”, they take self-penned material along with music rooted in the British Isles and with the flick of a bow, a finely chosen chord or slip of a beat, produce richly atmospheric arrangements  “with notes seemingly plucked from the stars and rhythms from the equator”

Their November 2017 release, ‘The Wife of Urban Law’ received several ‘Best Of’ end of year accolades, including making it on to Mojo Magazine’s ‘The 10 Best Folk Albums of 2017’ list, and it led to Peter being honoured with Fatea Magazine’s Instrumentalist of the Year for Achievement Award.

Peter’s ongoing musical excursions and collaborations continue apace, and in his 70th year he shows no signs of slowing down or of resting on his laurels.

2018 opened with the recording of Well Met with ace melodeon player John Spiers (ex-Bellowhead), which the Duo toured during the month of March, and the expanded Gigspanner line-up,  which features BBC Folk Award winners Phillip Henry and Hannah Martin will be touring during April. On top of that, he has also managed to squeeze in a tour with The Feast of Fiddles. The finale to his busy season will be three more dates with the Gigspanner Big Band at the end of the month, followed by a tour with Gigspanner Trio during the month of May.

“I can only think of a handful of folk musicians world-wide that have the kind of relationship with their instrument that Peter Knight has: Martin Hayes, Enda Scahill, Mike McGoldrick, John McCusker, Martin Simpson.

Many people as they trickled out into the night said that this was one of the best gigs they’d ever been to. I’d agree with that. If you get a quarter of a chance to see them, go – there were people there last night who had travelled many miles to be there. It was well worth every mile” Mike Harding

If you haven’t experienced Gigspanner Trio or The Gigspanner Big Band, you really should, they are out on tour soon, be quick, dates are already selling out, so clear a space in your diary !!

3rd The Painswick Centre
Painswick
Gloucestershire
All ticket enquiries to cantonacrepromotions@gmail.com
Or telephone 07596 823 881

10th The Gulbenkian Theatre
Canterbury
Hosted by Folk in the Barn
https://thegulbenkian.co.uk/event/peter-knights-gigspanner/