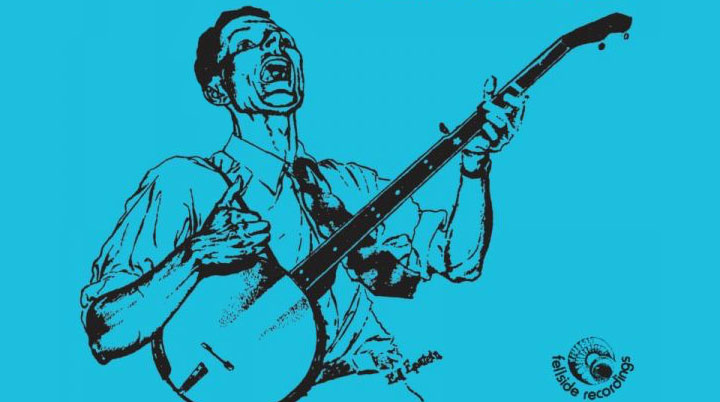 ‘Pete Seeger in England’ is a two disc album. The recordings on Disc 1 come from two LPs, Pete Seeger in Concert Vols 1 & 2 (1959) which were recorded at St Pancras Town Hall in London. Disc 2 is a recording of a 1964 concert in Manchester’s Free Trade Hall.

Because even now, 57 years after Disc 1 was recorded,  52 years after Disc 2 and two years after his death at the age of 94, Pete Seeger can still be relied on to tell you how it’s done. With banjo or guitar and voice, he performs a plethora of wonderful American, British and Spanish songs among others and he talks to his audience about them. He speaks of other things too – he worries if people can hear him up in the high stalls; he jokes with the audience that they need to join in choruses because they live in a democracy; he celebrates young American folk singers Bob Dylan and Tom Paxton; he talks sadly about Woody Guthrie having been in the hospital for several years and about the fact that his song writing days are probably over. He talks about the optimistic songs being written in places like Birmingham, Alabama as the Civil Rights movement progresses.

‘Pete Seeger in England’ is not only an album – on top of this, it’s both a musical and historical resource and, actually, a lesson in how to be a good person. Pete’s compassion, warmth, empathy and optimism lends itself entirely to the music he spent most of his life advocating and it’s a good reminder to us of his legacy and of what folk music should be today because of him – inclusive, politically engaged, outward facing, accessible and egoless. An album of incredible value.