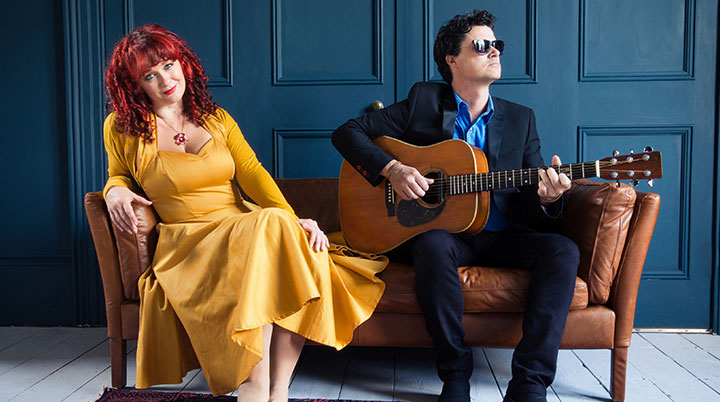 Kathryn Roberts and Sean Lakeman have developed a strong partnership in more ways than one. On the one hand, the arrival of their children caused a short break in the early part of their career and yet, on the other, their musical roles have become both distinct and complementary. Basically, Kathryn provides vocals, piano and flute while Sean is the one with the guitars and his hands on the production of their recorded output.

With their albums gaining increasing critical acclaim and BBC Radio 2 Folk Awards for the duo aplenty, this fifth album is eagerly awaited by many. Its title, ‘Personae’, is revealing in its own way. The songs all have their own character whether they are drawn from the folk tradition or self-penned, gently delivered or driven along with some force, straightforward or mysterious tales. It’s a characterful pattern that has become stronger over the years as their albums have emerged.

They start off in a strident rhythm with ‘The Knights Ghost’, a traditional song that gets some added momentum when Sam Kelly adds his guest vocals. In typical unpredictable style, we’re soon treated to a self-composition which tells the rather odd tale of a giant killing that legend tells us leads to the formation of the city of Antwerp, ‘Tribute of Hands’. As the name of their Iscream Music Records label indicates, it’s clear that the duo has a playful way with words.

There’s a perfect mixing of tradition and self-composition when they tackle ‘Boney’s Defeat’ with its delicately balanced multi-tracking of Kathryn Roberts’ acapella vocal. Only to be followed by the self-penned ‘Old, Old, Old’ which takes the view of another long time resident of St Helena and has an old timey feel added to it by the fiddle of Seth Lakeman.

‘The Poison Club’ has a lyrical humour with the kind of vaudevillian feel that you can hear in some of the music of Kate Bush. Elsewhere, ‘The Street of the Cats Who Dance’ also has some fun with a tale from St Malo where mastiffs where withdrawn from the nightly patrol after a bloody incident when a naval officer was killed.

For many, it will be the ever developing vocal of Kathryn Roberts that stands out on this record. Her singing is always done to perfection in addressing the one cover on the record, Sandy Denny’s ‘Solo’, or their original song ‘Independence’ where the relationship between mother and her growing child is explored.

Much has already been written about the talents of the Lakeman brothers and their various musical partners. Sometimes, the spotlight has been elsewhere in this musical family. However, it’s fair to say that Kathryn Roberts and Sean Lakeman have really started to build a legacy of music that does them proud.