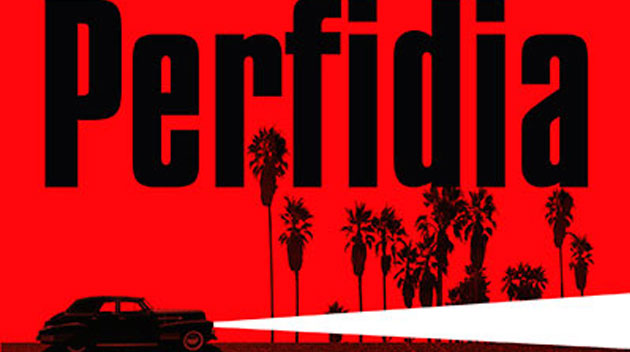 The start of a new LA quartet is a big day for Ellroy fans, for the uninitiated his original crime fiction quartet encompassed the novels The Black Dahlia, The Big Nowhere, L.A. Confidential and White Jazz, all of them are set in 1950s LA and follow a connected set of characters. He has taken the noir crime story to new psychosexual depths where corrupt cops chase strong women and plots twist and bifurcate, all delivered in an increasingly staccato style.

Fact is, Ellroy is an enigma, a hulking right wing foul mouthed politically incorrect elephant in the establishment room. Perfect qualifications to write some of the best noir ever, his portrayal of 50s LA transports the reader so perfectly that there is no sense of his stories being period pieces.

He returns to the same cast of flawed, twisted and deeply compelling characters from the first quartet, wound back in time to their younger selves at precisely the point America entered WWII. Perfidia is set across the few days surrounding the bombing of Pearl Harbour seen through the eyes of a group of LAPD cops and a Japanese forensics specialist. Inevitably caught in the explosion of xenophobic jingoism this character has to survive on his wits. Being trapped in an Ellroy novel he can only do that through cunning, blackmail and deviousness.

Perfidia is Ellroy at the height of his powers, the staccato beat of his most recent novels (leaving out connecting words) has softened, they still read like an improv jazz album, just not one on speed. This promises to be as sleazy, explosive and addictive as the first quartet.

James Ellroy was born in Los Angeles in 1948. He is the author of the acclaimed LA Quartet, as well as the Underworld USA trilogy.