On My Page – Courtney Marie Andrews 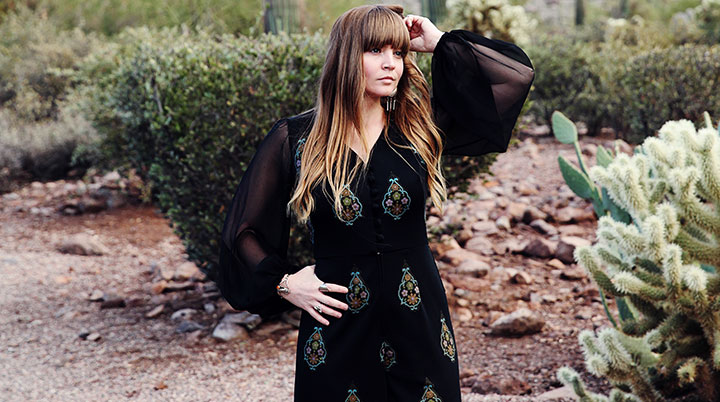 With her ‘Honest Life’ album, Courtney Marie Andrews got the attention that her fine songwriting deserves. It’s taken a little while to get to that point. So, Loose Music decided that re-releasing some earlier material for this freshly growing audience would be a wise move. It’s a particularly good decision as ‘On My Page’ was recorded with a band format much like the successful ‘Honest Life’. For those wanting to check the history of these recordings, the album has ten tracks that were originally put out as a 2013 release.

She’s been performing in front of an audience from around the age of 16 and writing songs from an even earlier age. Busking was a path to work as a backing singer for the likes of Damien Jurado and Jimmy Eat World. When she could, the chance was grabbed to put down her own songs in the recording studio. These are some of the early results of those stolen moments.

As she sings on the opening track, ‘Woman of Many Colours’, she’s a ‘woman of many stories’. It’s a sentiment that rings true and, like her popular last release, the lyrics express personal feelings about life’s ups and downs. ‘500 Nights’ tells of a much missed relationship whilst ‘Paintings from Michael’ reaches out to an imprisoned talent. The latter’s piano and vocal production is reminiscent of the approach taken by a young Joni Mitchell. Indeed, Courtney’s voice has a similar fragile but strong feel to it that fans of that Californian icon will find appealing.

The quality of material on this record stands up well with ‘Honest Life’. It’s certainly not a move from the record company to cash in while she’s got the public ear. Like some of the tracks from ‘Honest Life’, ‘Blue Woman’ is heart on the sleeve songwriting about human sadness and our clinging to relationships in the hope of happiness. Another particular favourite, the closing ‘Left-Handed Angel’ has a delicious blend of rolling guitar motif, strings and vocalising that’s worth the purchase price alone. It’s closing lyric of ‘you’re either with me or you’re not’ is deserving of a big vote for the latter.

As you’ll often find with an artist’s early releases, these are songs that feel ‘lived in’ as the artist has worked on them over a period of time without the pressures of recording schedules. In fact, on her recent UK tour, she was telling audiences of her fondness for the songs on here as they hark back to her days of busking for a living. It’s a fondness that others will share, for sure.