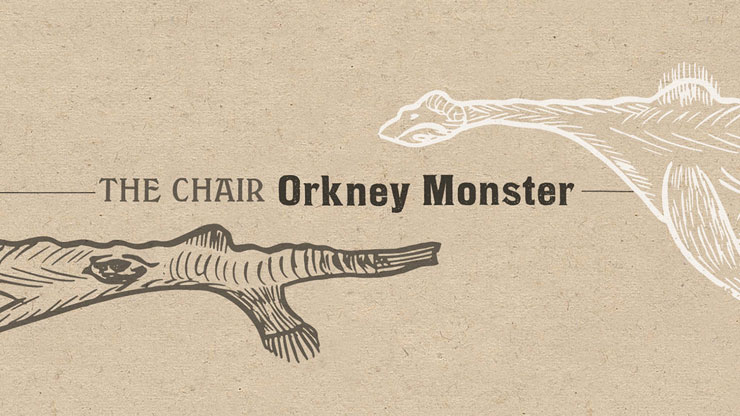 The Chair hail from Orkney, a wild and beautiful series of islands off the north east tip of Scotland. I came across them initially with their debut set ‘Huinka,’ which was as lively a barrel of monkeys as you could wish for. They’ve recorded intermittently since, ‘Orkney Monster,’ is only the third set they’ve released, but by God it’s good. Exactly what’s needed in strange times, this is rough, rowdy and energetic but has the power that’s inherent with any band who fully appreciate and utilise their background and heritage to create a personality. The Chair have that happy knack in spades. Off the cuff they label their music ‘Orkney stomp’ and who the hell am I to disagree?

Predominantly an instrumental crew, the stomp is utterly irresistible and it’s easy to see why they’re chosen to close virtually every festival the islands can conjure. The playing is so fluid and bubbly with the correct dose of atmosphere or heft accorded. If you’re one of those bores who reckon one set of jigs and reels sounds pretty much the same as another, then buddy this is the album to prove you wrong. Far more than just a bit wrong too. Opening mix ‘Beachcombers,’ is a driving hooley penned by guitarist Gavin Frith, it veers and swoops about performing u turns and loop the  loops all the way to a storming finish. Likewise ‘Fixing Jigs,’ which’ll have you dancing a hole in the lounge carpet and on ‘Festival Reels,’ obviously saved for the event of the title, they rip through the trad ‘Lads Of Laois,’ in serious smoking style.

Adapting Tom Waits into a sea shanty and Tim O’Brien’s bluegrass gospel to good time singalong shows they’re not just a one trick pony, both tracks fitting snugly into the celebratory grove. With an eight piece line up, multiple fiddles, accordion, banjo and a rock engine room, things could easily have gone woobly but the band alongside engineer Mattie Foulds keep a tight rein on proceedings so the overall impact never dips or slacks.

Cleverly wrapped in a fold around cover based on an old WW2 newspaper distributed to troops based in Orkney, the jacket’s almost as fascinating as the music. Thought’s gone into every detail of ‘Monster’ and it shows.

A huge thumbs up then. Just the sort of music which puts a huge smile on your face and blocks out whatever else is going on roundabout. Put the Orkney stomp into your life and light the blue touch paper, fireworks guaranteed. One of the best CDs I’ve heard in quite a while, you’ll love it to bits.