Notes From An Island – Blair Dunlop 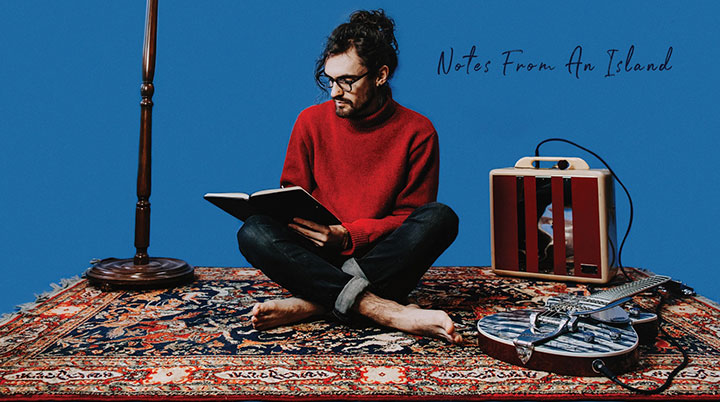 There are many young musicians whose folk heritage has helped propel them into the world of music. Some get absorbed into the folk music scene and remain there, others follow their own muse into a wider musical perspective. ‘Notes From An Island’ is a record that confirms Blair Dunlop as a young man firmly in the latter category as he reflects on life in dear old Blighty.

His musical influences are clearly driven from a wide set of traditional music and singer songwriters such as Jackson Browne. Indeed, one of the catchiest of songs on the record, ‘Sweet On You’, delivers some advice on choosing a sweetheart with “and if you don’t like Ry Cooder, how could I ever be sweet on you?” An approach that will no doubt have a ring of familiarity to music mad folk like you and me.

Whilst Blair has a firm hand in writing all twelve songs, his guitar work is also as good as it gets on this record whether you’re talking about the delicious hook on ‘Threadbare’ with its gently lilting melody, or, the rockier solo on ‘Wed To Arms’. The latter being the song whose words act as the glue that holds together some lyrically mature songs.

Talking of those lyrics, watch out for the depth to them. Whilst a cursory listen to the record may hear many ‘boy meets girl’ moments, there’s usually another angle to the story. Whether that’s the emerging interest in the sweetheart’s mother on the aforementioned ‘Sweet On You’ or the post-relationship concerns of ‘I Do’. It’s not all about love interests – elsewhere, for example, you’ll also find Blair Dunlop musing on life today on the British Isles as he considers how rich and poor are juxtaposed on ‘Green Liquor’.

He’s ably accompanied on the record by long term pals Fred Claridge on percussion and Jacob Stoney on all manner of keyboard. However, we should send a generous nod in the direction of Ed Harcourt who not only adds bass, backing vocals and guitar but also provides a masterful understated production which lets the songs shine through. But let’s be clear, it’s the butterfly that is Blair Dunlop emerging from his cocoon that we should admire. Don’t let this one flit by you, catch it now.