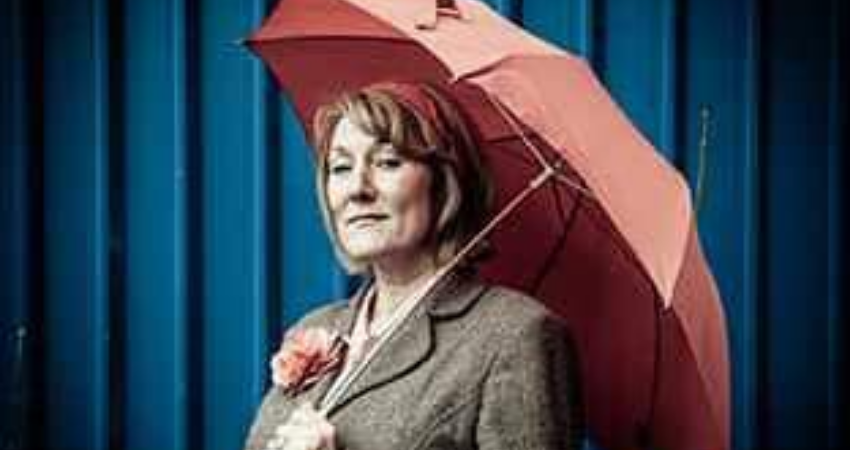 Usually to be found out front of the bounciest, most committed, keenly melodic folk rock aggregation you’re ever likely to stumble across, of course I refer to Merry Hell, Virginia Kettle is a creative figurehead. Sure she urges everyone to their feet through witty banter and sentiments with which no thinking person could disagree, but examine the credits on their CDs where you’ll find that she writes an increasing proportion of their repertoire. Explained perhaps by the Kettle family bond though she locked into their style and approach pretty much from the off, reflecting her own craft and effort from a time before she joined the group. Those seeking that earlier period are advised to look for Virginia Barrett, sample ‘Sense Of Human,’ and ‘The Quiet Life.’ For this very welcome release she’s corralled a choice few of her colleagues to form The Dreamkeepers, a backing band maybe, though in no way do they intrude, husband John on guitar, Nick Davies on bass and fiddler Neil McCartney instead add texture and atmosphere to a collection of songs that are thoroughly Virginia.

Don’t come with any preconceptions either, this isn’t Merry Hell, nor should it be, whilst there are songs in common, most notably the title track which is stripped right back to an almost hushed reverence, a truthful simplicity floating on a cloud high fiddle line, hard to ignore, there is a wider influence and fresh nuance now she can stretch out across a full twelve tracks. ‘Union Jack House,’ is a wry comment on the national condition in later 2020, we’re all different yet have more in common than we admit, why can’t we get along? ‘Coming Round,’ comes on, simple picked guitar and rolling melody line, echoes of Sandy Denny or Shelagh McDonald in its straight forward British styling. ‘Growing, Growing Gone,’ is a mother’s thoughts and emotions tumbling out as her child leaves home to forge their own path and identity, ‘Spy in A Previous Life,’ has elements of theatre about its subject, ‘I imagined a female spy with a tendency to spill the beans after a tipple or two,’ she confesses in the press blurb, there are definitely suggestions of the late Victoria Wood around.

in the press blurb, there are definitely suggestions of the late Victoria Wood around.

Love is a under current through several cuts, not just straight forward gushing love, but missed opportunities, quiet reflections, respect, honour and passion dissipated, ‘The Butter Song,’ considers how opposites attract, ‘ever considered someone like me to sharpen the arrows for your bow?’ she coos seductively over a steady beat. ‘Made In The Stars,’ examines a shared life driven to silence and routine, a theme revisited to a lesser degree in the ballad ‘Falling,’ which closes the album where deeper passions and sharing mean commitment of a higher degree as you understand what a true relationship asks of you.

When I think about ‘No Place Like Tomorrow,’ it was inevitable that at some point Virginia was going to make another solo record, thankfully she has delivered it at a point when she is at her surest, writing keenly and with humour, care and an individuality which is both perceptive and shrewd inviting as it does anyone with an ear for music founded on hope. Recommended without reservation.