New illustrated edition of Casino Royale from The Folio Society 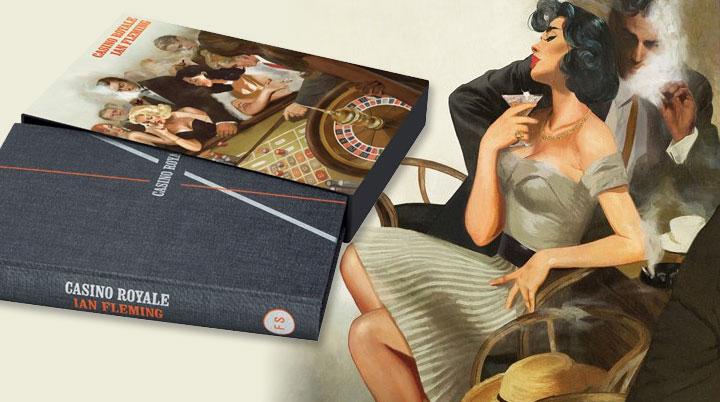 The Folio Society is proud to present the first title in its new 007 collectors’series. Few characters have come to define a genre as James Bond has done, and this introduction to his world, with its merciless villains, spectacular dangers, ill-fated romances and exotic settings,  is Fleming at his best.

A lavish edition, with seven original illustrations and a pictorial slipcase by acclaimed illustrator Fay Dalton, and an introduction by Booker-Prize winning author John Banville, pays homage to the enormous success of Ian Fleming’s iconic novels. Darker and more visceral than those new to the novels might imagine, Casino Royale plunges Bond into a battle of luck, wits and physical endurance against Le Chiffre, a corrupt agent of the feared Soviet organisation, SMERSH. James Bond, ‘the finest gambler available to the Service’, becomes his opponent in a game of baccarat – a game set on a ‘luminous and sparkling stage’, with violence lurking in the wings. The beautiful and inscrutable Vesper Lynd has been sent to assist him, but their love affair will imperil them both.

As Banville writes in his excellent introduction on the genesis of the novels, Fleming based his hero on a number of people he had known during the war. Bond is absorbing and elusive; at once charming and, at times, shockingly ruthless. He is often cold, but ‘easily tipped over into sentiment’; a subtly-evoked vulnerability and capacity for self-doubt temper the impression of a man who is unshakeable and undefeatable. For all his extraordinary, single-minded precision when dealing with his enemies, his attitude is more equivocal than one might expect. Sometimes, he observes, ‘the villains and heroes get all mixed up’.

Fay Dalton is a London-based illustrator and winner of the 2010 Pickled Ink Award for illustration. Fay’s illustrations ooze 1950’s sophistication, with her combining traditional drawing and painting methods with digital painting to complete the flawless looks as seen below.

When illustrating Casino Royale for The Folio Society, Fay has to think creatively – Bond is such a massive character, men imagine being him, women imagine being one of him infamous ‘Bond Girls’ – so it was important to protect his (Bonds’) biggest fans visions of Bond by not showing his full face. Fay had to use all her ingenuity to obscure his face in otherwise sharp and detailed illustrations. Casino Royale is a darkly humorous Bond novel, focusing on themes of masculinity and ‘what it means to be a man’ – how did Fay overcome this overriding sense of ‘masculinity’ as a female illustrator to create illustrations that capture the pure essence of what it means to be James Bond.