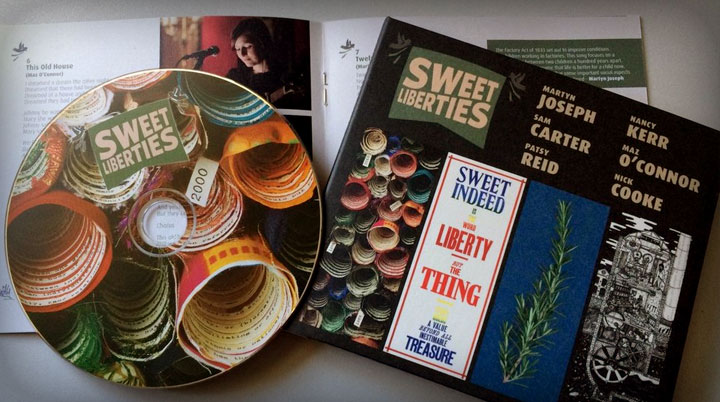 Sweet Liberties is a new 14-track album that charts Britain’s social and political journey through the eyes of some of the country’s leading folk singer songwriters and musicians.

From the original 2015 commission by Folk by the Oak and the English Folk Dance and Song Society (EFDSS), in partnership with the House of Commons as part of the 2015 Anniversaries: Parliament in the Making programme, these new and original songs celebrate 800 years of the pursuit of democracy.

Sweet Liberties features a line up of musicians with a strong pedigree. Among the tracks, ‘The Welsh Springsteen’ Martyn Joseph pays tributes to fellow countrymen Nye Bevan and Dic Penderyn, and BBC Folk Singer of the Year (2015) Nancy Kerr weaves subjects including the Magna Carta, Human Rights Act, women’s suffrage and slavery into compelling and heartfelt songs.

Sam Carter showcases his storytelling skills to examine the struggle against slavery. One of the freshest voices on the contemporary folk scene Maz O’Connor brings history firmly into the present day with her reflections on the Poor Law and race relations.

Backed by talented instrumentalists Patsy Reid (formerly of Breabach) and Nick Cooke (Mawkin, Kate Rusby Band), this is a unique album of thought provoking, highly original and relevant new music that was recorded in response to overwhelming demand from audiences during the project tour.

Sweet Liberties has already received coverage on BBC Radio 4, BBC Radio 2, The Independent, Morning Star, The Times, R2, and Songlines, as well as receiving radio play across the country.
Sweet Liberties was supported by the Houses of Parliament and by PRS for Music Foundation.