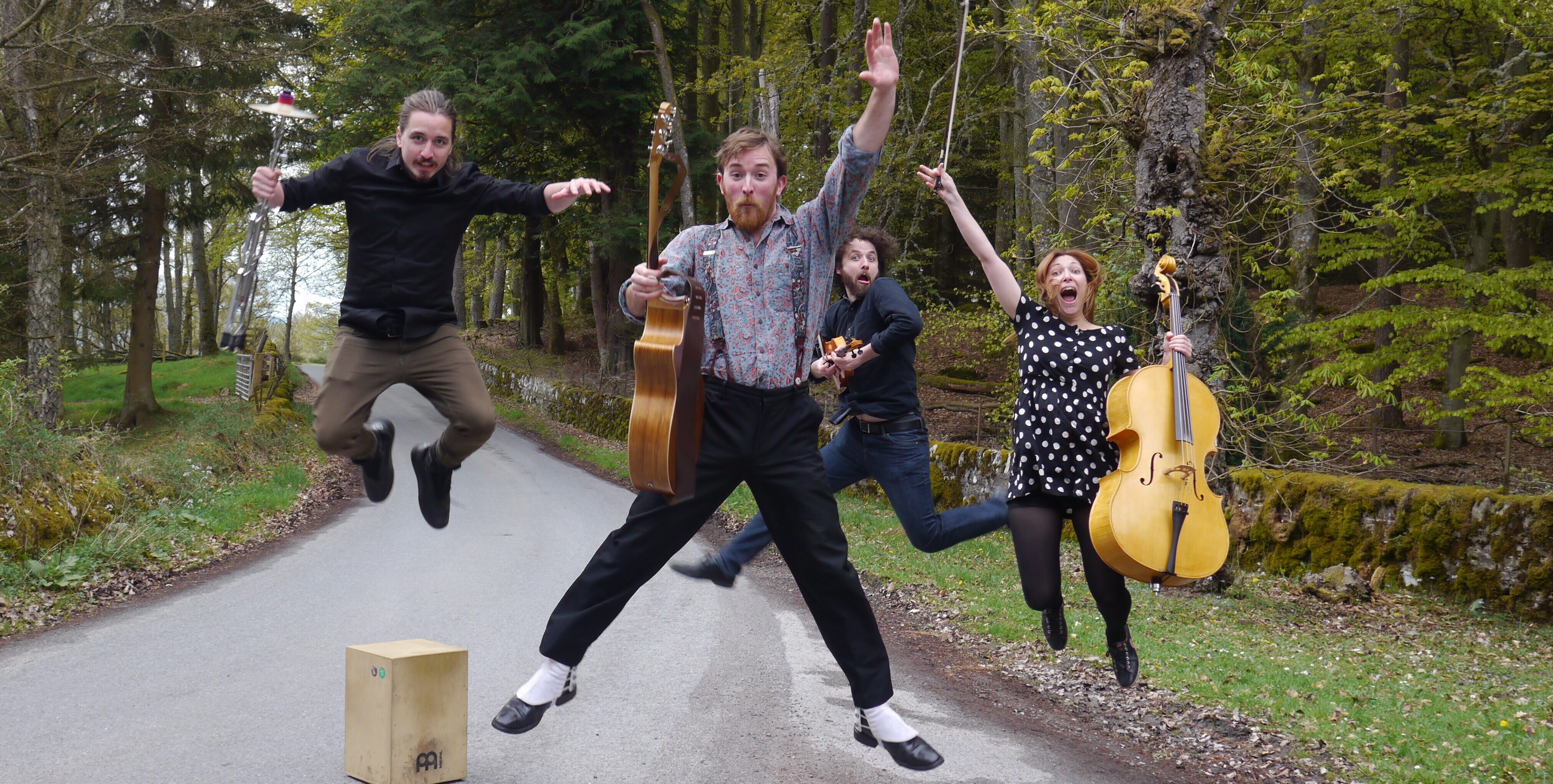 Since his emigration to Canada in 2014, Ex-lead singer/ songwriter of award winning Edinburgh Bluegrass band The Southern Tenant Folk Union, and Scottish soul man Ewan Macintyre has been developing his own individual transatlantic roots style. Having
produced two albums in Montreal, his latest venture Dream on Sally features a core group of musician; Quebec cellist Karine Bouchard (Trifantasy, Rachel Beck) and Scottish fiddle player Peter Menzies, with Ewan on Guitar/Vox/Mandolin. The trio met at traditional sessions in Montreal, QC and in Edinburgh, Scotland and came together formally professionally in March 2018 for a tour of Denmark and Germany.

Ewan’s songwriting draws heavily upon the great cross roads of early American music (where styles of soul, swing, blues and country collided). All this, together in a hot soup of Celtic/ Bluegrass and a dash of Prog rock and 90’s R’n’B and behold, you have the Ewan Macintyre Band’s sound. The writing over the new album is heavily inspired by his musicians, building lush string arrangements around his vocal delivery.

Each track represents a unique element of Ewan’s songwriting and taste. The tracks Same Story (Cigarette Butts) and Keep your Eyes feature hooks and choruses whilst continuously progressing harmonically. Both songs deal with deal with questions of identity and being present in the moment. Track three, Each to their Own is a subtle ode to Doctor Johns Such a Night, though lyrically tells the story of an unfortunate experience picking up an overzealous hitch-hiker on the road between Ottawa and Montreal. Tracks Muckle Mooth and Breaks n Waves showcase a more Celtic flair often found throughout the bands live shows, the former particularly allowing Peter to really rock out on the fiddle. Pieces is similarly a more complex harmonic exploration with nods to the Beatles and classic songs God Bless the Child and Bill Evans Someday my Prince Will Come. Bright lights and Pictures bring us back to a more dreamy guitar song, exploring the open C tuning. It was written outside Tadoussac, QC, a beautiful little town that sits on a fjord famous for its beluga whales, and one of the best places in the world to view stars and the Milky Way. The pizzicato strings and long arched notes from the cello and fiddle,  give a sense of endless wonders on long summer evenings. Lastly, the title track Dream on Sally began as an attempt at a four chord wonder and sing along. The lyrics are about the human condition and our impossible satiation for life. It concisely sums up the album, and speaks of moving forward, dreaming and never being satisfied.

The album was recorded over a three month tour in Scotland, Nova Scotia and Quebec in 2019. Recorded on the Isle of Mull, Scotland by Gordon Maclean and then at two Canadian sessions: First of all at the groups studio in Montreal and secondly at a residency in Nova Scotia (listen out for background crickets!). The production harkens back to Ewan’s bluegrass experiences, recorded for the most part live off the floor. As such there is a raw energy that comes through each track and a deeper intimacy between the musicians. It was mixed and mastered by Montreal producer Pat Steele with help from Ewan Macintyre.  As well as the main trio of musicians it also includes guest artists from Montreal and Edinburgh including Antoine Larocque on accordion, Ian Belcourt on Bass, Alex Auldsmith on percussion and Dana Babineau-Burns and Amanda Gibeau on vocals.