New Album and extensive tour for the The Shackleton Trio 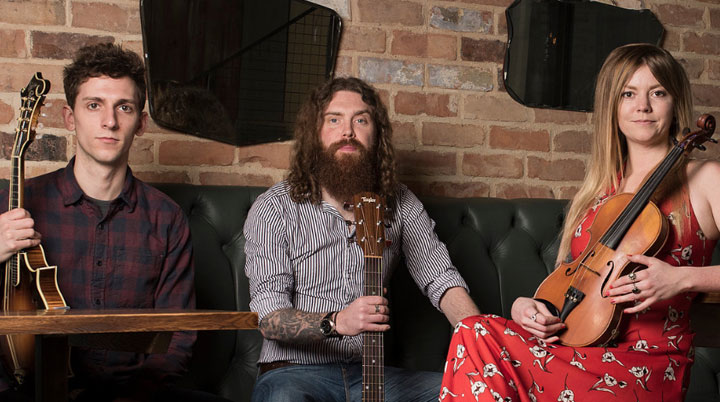 The Shackleton Trio (formerly The Georgia Shackleton Trio) features fiddle player Georgia Shackleton alongside guitarist Aaren Bennett and mandolinist Nic Zuppardi. Together they play an exciting blend of folk, Americana, and self-penned material instrumentally influenced by British, American and Scandinavian folk traditions, with a regional twist from their native East Anglia. Following the success of their debut album ‘The Dog Who Would Not Be Washed’, they are excited to be heading back out on the road with a brand new release ‘Fen, Farm, and Deadly Water’.

Recorded at Grange Farm Studios in the heart of the Norfolk Fenlands, the album continues to showcase the band’s eclectic musical background. Locally sourced material includes a Fenland song from pig farmer Fred Rooke, the haunting 1611 poem Powtes Complaint, as well as the Cry Of The Radish Boys At Great Yarmouth, given a distinctly bluegrassy twist. The album also showcases the trio’s instrumental prowess, with original compositions The Stanford and Bolton Lodge, alongside Karen Tweed’s Only Viveka, and Swedish polska the Penknife Killer. Original songs by Georgia top off an impressively varied yet coherent album that seamlessly blends a broad musical palette.

The group have toured the UK, Belgium, and the Netherlands, with appearances including Rotterdam Bluegrass Festival, Cambridge Folk Festival, Towersey Festival, Broadstairs Folk Week, Folk East, and concert halls and folk clubs across the UK. Their 2018 diary will take in a host of UK and European festivals, as well as a tour of Sweden, Denmark and Norway.

They are launching locally on 6th April and will have physical copies of the new album at gigs from 30th March if you want to grab a copy,  before the National release date on 4th August, when it’ll be available on all the digital platforms.

Full details can be found at