They are four outstanding musicians. They have performed on stages in more than 20 countries; won multiple coveted awards, featured on BBC1’s Hogmanay Celebration and thrilled festival audiences from Cambridge to Shetland, Tonder to Winnipeg.

The distinctive contemporary folk four-piece have established themselves as one of Scotland’s most engaging and in-demand instrumental line-ups – an act of incredible passion and drive.

The final day of 2020’s Celtic Connections Festival (February 2) was a milestone one for Glasgow band Rura. At a hometown gig – and an incredible ninth appearance at the world’s largest winter festival of its kind – they recorded an album to celebrate their 10th anniversary, Live at the Old Fruitmarket.

Pals and past collaborators included the band’s former singer-songwriter Adam Holmes and guitarist Chris Waite as well as Treacherous Orchestra’s Ali Hutton and Glasgow multi-instrumentalist Finlay MacDonald (both on pipes and whistle) and James Lindsay (Breabach) on bass and synths.

Says Jack Smedley: “Over the past 10 years we have made incredible friends, made ridiculous memories and played a few tunes along the way! We want to thank everyone who joined us on stage that night at The Old Fruitmarket as well as every single person who has come to see us. We had a blast.”

Celtic Connections was where it all started for the band – they were Danny Kyle Award Open Stage winners in 2011 and won the Best Up and Coming Artist accolade the same year in the MG Alba Scots Trad Music Awards. Just four years later they were so well established that they won the 2015 Live Act of the Year gong in the same awards. 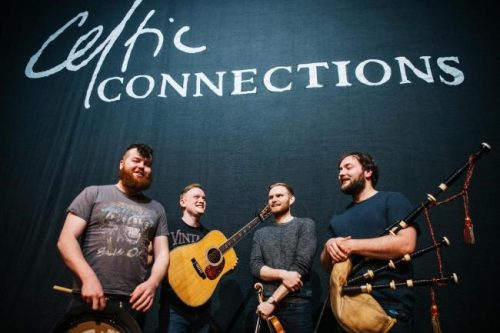 The spellbinding set ‘bottled’ for Live at the Old Fruitmarket sees the band delve back into their back catalogue, revisiting numbers from debut album Break It Up (2012), Despite the Dark (2015) and their first exclusively original and instrumental release In Praise of Home (2018).

Seen as one of Scottish folk’s finest pipers, Steven Blake dominates the atmospheric, brooding seven-minute long The Dark Reel, composed by Fife’s Fraser Fifield. Through increasingly complex layers it builds to a pulse-racing climax of dazzling ‘all hands on deck’ musicianship and features Chris Waite on electric guitar.

Two tracks from the band’s last album feature – the title track In Praise of Home, composed by Blake and I’ll Never Forget, written by Foley. That album featured spoken word input from band members’ grandparents about their thoughts of ‘home’. Smedley’s softly-spoken grandfather James Russell is heard at the start of In Praise of Home, talking about the safe haven of his Montrose upbringing. Smedley’s beautifully-judged fiddle rises and falls gently before the pipes drive in to expand the melody.

Foley’s grandmother Sheila Littlejohn tells her story in the evocative and wistful air I’ll Never Forget – Adam Brown’s guitar initially circling her words as she recalls having her 13th birthday on board a ship from Jamaica to Scotland in the 1930s. The pace picks up into a stand-out feel good number before coming full circle to its benign opening and more spoken memories from Sheila.

Bridging the gap between the two ‘memory’ songs is one of Rura’s relentlessly uptempo tracks. Day One jumps straight out of the box with an uncorked exuberance. Written by Smedley to celebrate a new chapter in Rura’s ever evolving story it gives the band a fast and furious workout and gets rapturous applause from the audience.

The special guest appearance by former band vocalist Adam Holmes brings two of his self-penned songs to the set. With his clear, stand-out voice, Holmes delights the Fruitmarket throng with the gentle Mary and the irresistibly beautiful ballad Weary Days, elegantly embroidered by the band.

The Glorious 45 set features a graceful opening tune with Ali Hutton on whistle merging into Foley’s fast and frenetic composition recalling the 45% of people who voted for Scottish independence in the 2014 referendum.

There’s a chance to catch breath at the start of Elliott’s set – written by and featuring piper Finlay MacDonald, newly appointed director of Scotland’s National Piping Centre. With a lovely sedate fiddle opening the catchy march – named for MacDonald’s son – builds as the joyous pipes break through and the band jumps on the wagon. 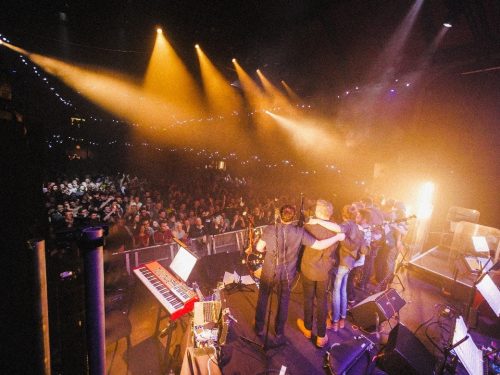 The encore sees Rura revisit Horizons Pt 1 and 2 from their last album. Pt 1 is a contemplative, epilogue written by Blake. Opening with Smedley’s dreamy, delicate fiddle, Blake penned the tune to convey “the indescribable things you can’t quite express through language’. It segues into Pt 2, a fizzing, buoyant tune written by Smedley that brings the perfect audience-band bond to the decade’s celebration but inevitably leaves the audience wanting more.

If you couldn’t be at that Celtic Connections gig in person this live album will serve you well – it’s a defining showcase of just how far Rura have travelled.

Live at the Old Fruitmarket is a collector’s item – a sparkling, spontaneous capturing of one very special night in Glasgow.

Recorded by Keir Long, mixed by Euan Burton and mastered by Grammy award-winning Alan Douches at West West Side Music, Live at the Old Fruitmarket is released on September 11.