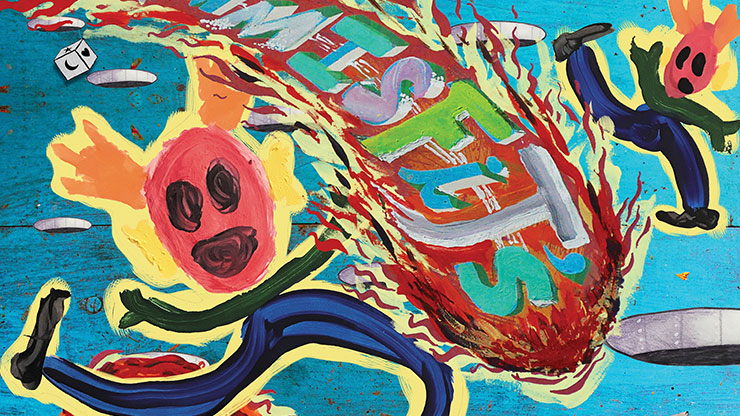 Jim White came to the fore with his full album debut, ‘The Mysterious Tale Of How I Shouted Wrong-Eyed Jesus’. An album that had its manic moments but was wrapped in the pop imagination of its creator. There followed a series of albums that had this enigmatic artist exploring the darker areas of the outside world and the inner psyche. We reach 2020, a year that none of the world’s inhabitants will forget and Jim White releases the wild ride that is ‘Misfit’s Jubilee’.

Currently a resident of Georgia, White’s music has leant towards collaboration with a wide range of artists to add to his own multi-instrumental capabilities. This process has taken him from working with talented locals to more established names such as Johnny Dowd. This time out, he’s accompanied by a core band of Belgian sidemen Geert Hellings (guitars and banjo) and Nicolas Rombouts (electric and stand-up bass as well as keyboards) plus Marlon Patton on drums.

There are echoes of earlier White records on here which is unsurprising as some tracks are freshly polished songs that were dismissed by previous record labels as too extreme for his ‘brand’. The raucously sung lyric “I’m a schizophrenic version of a psychedelic vision” on ‘My Life’s A Stolen Picture’ was probably one of those moments.

Musically, ‘Misfit’s Jubilee’ moves around from the sunshine sound of ‘Sum Of What We’ve Been’, the punk of ‘Smart Ass Reply’ to the balladry of ‘The Mystery Of You’. However, it’s foolish to attempt to categorise White’s music as his approach shifts around within one song, never mind a whole album. Indeed, this inability to pigeonhole his music is central to White’s charm.

Reflecting a tumultuous 2020, there is little of the tongue in cheek humour that has brought lighter moments with songs on earlier records such as ‘If Jesus Drove A Motor Home’ or ‘Turquoise House’. However, ‘Misfit’s Jubilee’ is a record that lays bare the tough times that we have encountered via a myriad of musical hooks and memorable chorus lines. This all culminates in the rousing closing track, ‘The Divided States Of America’, which slinks along in its moody funk as White considers what has happened to the America of his younger years. Meanwhile, we know what happened to Jim White….. he’s still producing great records.