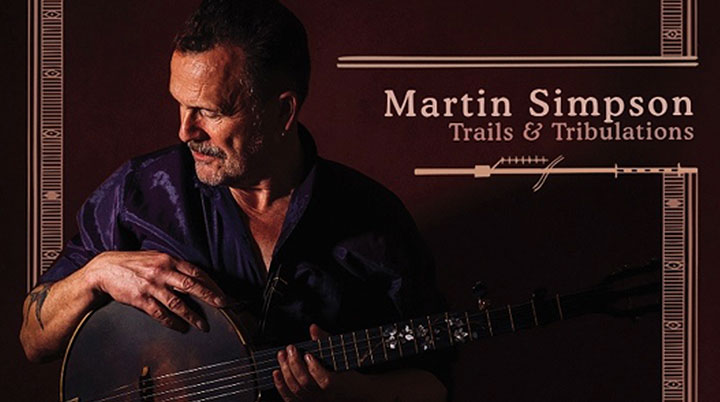 Umpteen albums down the line from when I first caught him supporting Steeleye Span, with an obscure item to plug called Golden Vanity on the long vanished Trailer imprint as I recall,Martin Simpson has gone from prodigy to phenomenon. You couldn’t find a more considered acoustic guitarist no matter how hard you look, Trails & Tribulations is the latest instalment in a remarkable career in which there has been little compromise and whole wagon loads of individuality. In lots of ways his new album is a summation of all that drives him, it’s a cross Atlantic roots mix, zig zagging from shore to shore, reviving not only old 60s folk staples but dusting off trad chestnuts setting them in new arrangements and bringing out the gothic that lay forgotten in their deeper recesses.

In fact I never knew until I did some recent digging that Mr. Simpson had stuck out an album as early as 1972 on the collectable, rare as hen’s teeth, Deroy label, which pretty much set out his stall and in 2017 he’s still mining the same rich seam, no signs of it playing out yet. The lead in is familiar indeed, Blues Run The Game can’t really be mussed up too much so here taken at a lick and pace the Jackson C Frank number is shined up with spit and polish, the eternal troubadour anthem ever relevant. There’s a deeply woeful sounding St. James Hospital in which excess hanky panky leads to a cruel, painful demise and no matter how many pretty girls carry laurel leaves Simpson doesn’t hide the despondency at the songs core. In fact he digs down into the pathos with an almost muttered vocal and cliff hanger air, equally Thomas Drew cards, whisky and guns ends in a bullet, grief and a warning from beyond the grave, one of those songs, don’t do what I did, but do as I say.

On the cover MS leans over a banjo which besides guitar seems to be his constant companion, there’s some mighty slick banjo picking about Bones & Feathers, the somewhat surreal tale of a woman rooting through rubbish bins to find inspiration – I think – is of Emily Portman stock and is thus attractive whilst being lyrically bizarre. Amongst the closing Brit trad, Rufford Park Poachers stands as the most recognisable though Simpsonfied, its men done wrong and sent wrong – Australia for a mere fourteen years – theme echoes lots of social messages, characters moving on due to misdeeds, travelling for the sheer thrill of living on the edge. The exposure of life’s gloomier corners even pervades the final track, a stark, thrilling retelling of Reynardine wherein a shadowy, vulpine figure lures impressionable females ‘ over the mountain,’ a mysterious fate awaits that we never get to hear. Simpson’s setting is chilling and alluring at the same time. It marks the end of a quite remarkable recording, new friends and old chums support him in the venture, count Andy Cutting, Nancy Kerr and Ben Nicolls amongst the latter, electric guitarist John Smith and daughter Molly amongst the former. As well there’s the reliable, steadying production of Andy Bell, but Simpson seems to have put far more of himself on the line here and it’s a ploy which works splendidly. Weak track you ask? What weak track… sure some function better than others but to echo what other journals have written before me, Trails & Tribulations is going to be up there on a lot of lists come the vinyl finals of 2017 no question.