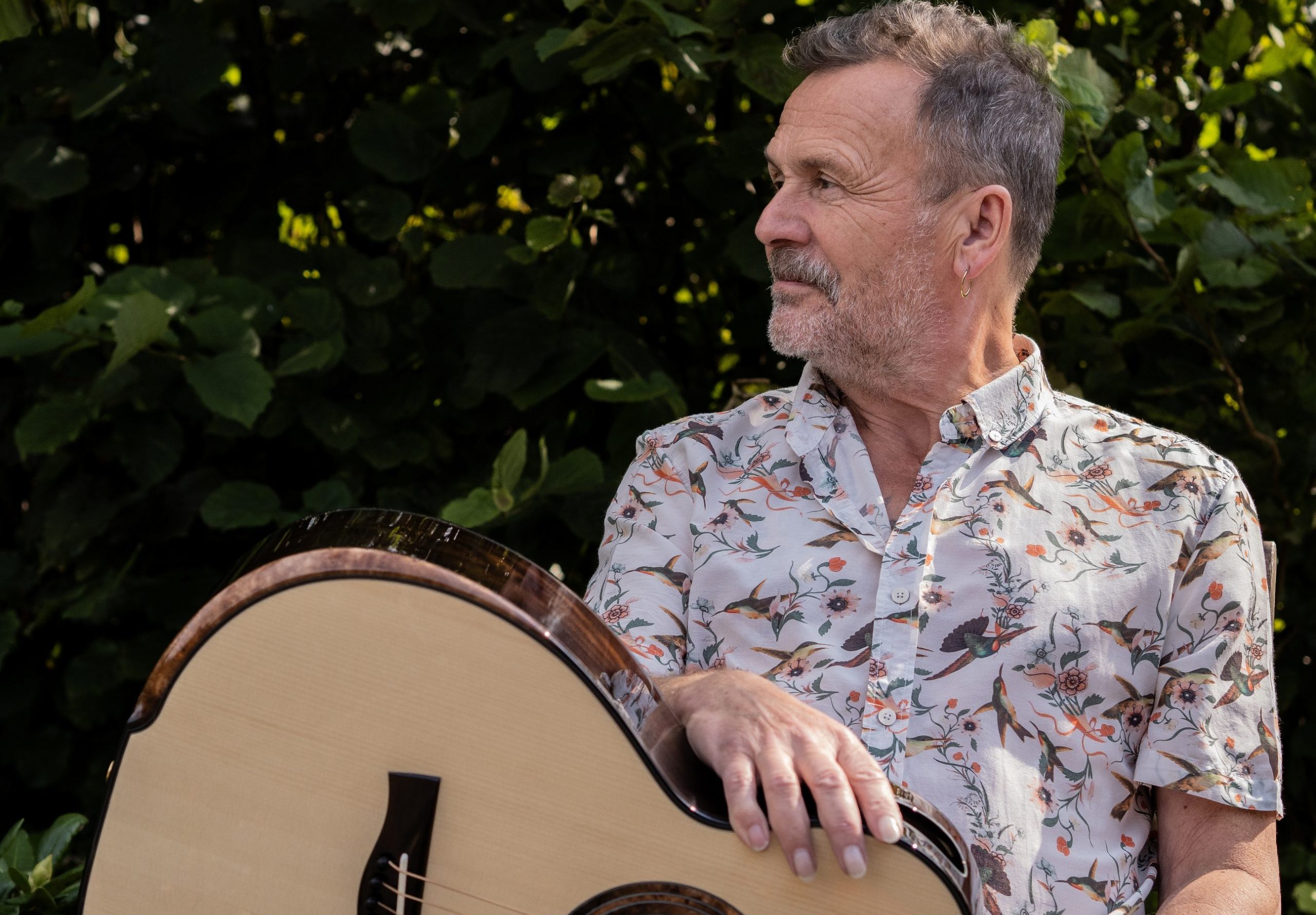 The remarkable intimate solo performances Martin Simpson gives go from strength to strength – every gig is a masterclass. He travels the length and breadth of the UK and beyond, giving rapt audiences passion, sorrow, love, beauty, tragedy and majesty through his playing.

“What’s it like being the best guitar player in the world…?” Martin’s modesty and grace prevented him from answering this BBC Radio 4 interviewer’s question recently, but the facts speak for themselves.

40 years after he recorded his first album, Golden Vanity, in 1976, Martin is known as a guitarist of formidable talent. Equally at home playing English traditional folk, American folk and blues and his own compositions, he is consistently named as one of the very finest fingerstyle guitar players in the world.

He is listed in Gibson Guitars’ Top 30 Acoustic Guitarists of all time, and Acoustic Guitar readers voted him number 12 guitarist in the world in 2005.

Universally acclaimed as one of the finest ever acoustic and slide guitar players, and a fine banjo-picker to boot, his solo shows bear witness to an artist at the very top of his game. Whether interpreting material from tradition or singing his own potent self-penned songs, Simpson is a remarkable storyteller: captivating and profoundly moving. His own songwriting produced the poignant ‘Never Any Good’, from Prodigal Son, 2007’s Folk Album of the Year.

Martin continues to collaborate with a dazzling array of people from across the musical spectrum: Jackson Browne, Martin Taylor, June Tabor, Richard Hawley, Bonnie Raitt, Danny Thompson, David Hidalgo, Danú, Richard Thompson and Dom Flemons are among the great musicians he has worked with.

In recent years, he has been a lynchpin in the award-winning Full English, The Elizabethan Sessions and, in 2015, recorded Murmurs, an exciting new album with Andy Cutting and Nancy Kerr. Martin’s latest solo album entitled Trails and Tribulations was released in September 2017 on Topic Records. Album guests include Andy Cutting, Kathryn Tickell, Nancy Kerr and John Smith. In September 2019 Topic Records released Martin’s new album ‘Rooted’, a mixture of Simpson originals and traditional songs and tunes with guest appearances from friends old and new. As ever Martin is pushing in new directions, expect exquisite ensemble playing and solo magic.

And then the the world stopped due to a global pandemic….In 2019, just before Christmas, Martin performed his last concert of the year in his home town of Sheffield. It was recorded, with no particular plan to release, through the mixing desk by Tom Wright, Martin’s front of house engineer on the night. It is a testament to the respective talents of these two friends how jaw-droppingly good this recording sounds.  Little did they know what was to follow in 2020. Lockdown brought lots of new creative ideas, not least a fantastic new album in the shape of the Topic release, ‘Home Recordings’, recorded at home, (this time with Tom in another room entirely, masked up and careful).  Martin said of the album at the time “To hear this live performance now brings a huge wave of emotions. A remembering of what we’ve been missing and what will come back.”

2021 Also marks the 20th Birthday of ‘The Bramble Briar’ release.  Here’s Martin to tell you about it’s significance to him ….

“In the year 2000, I was living in New Orleans, but contemplating a return to England. A friend of mine who came to stay in NOLA remarked that it felt like living at the circus…

At the time I was without a record contract, so I got in touch with Tony Engle at Topic to ask if he would be interested in doing an album. He very quickly replied that he would, and asked if I would make an instrumental album of British tunes and airs. At that time I had made a run of instrumental albums and didn’t want to do another, so I suggested I make a record of traditional, mainly English songs.
I was looking back on a repertoire influenced by my early days in the Folk Clubs and by decades of listening to great singers and players. In my notes to the album I wrote:
“What is very clear is the strength of expression, the richness of content, be it lyrical, musical, emotional or historical, and the reflection of people and places in the songs and tunes.”
I recorded the music partly in Santa Cruz California and partly in Robin Hoods Bay in Yorkshire, engineered by Barry Phillips who also plays cello, and Oliver Knight. I took the opportunity to record for the first time with Martin Carthy and Chris Parkinson both of whom I had known and respected for many years.
I am so happy to look back at this collection of songs and tunes. It was very well received at the time becoming Album of the Year at the BBC Folk Awards in 2001, where I also won Musician of the Year for the first time. It is the first of a series of albums I have made for Topic Records, 11 in 20 years. Listening to it again I am struck by the power and beauty of the songs, and by the vitality of traditional music.
Happy 20th Birthday to The Bramble Briar.”

Thankfully there is a light at the end of the tunnel and you can now experience “One of the virtuoso instrumentalists of the English music scene” (The Guardian) for yourself as he has released Autumn our dates, so check your diaries !!

“Simpson has become a fine interpreter of traditional and other songs, as well as a notable writer of his own.” The Times

*This information is accurate at the time of printing. However, details are occasionally subject to change, so please check venue near time of gig
before travelling long distance.