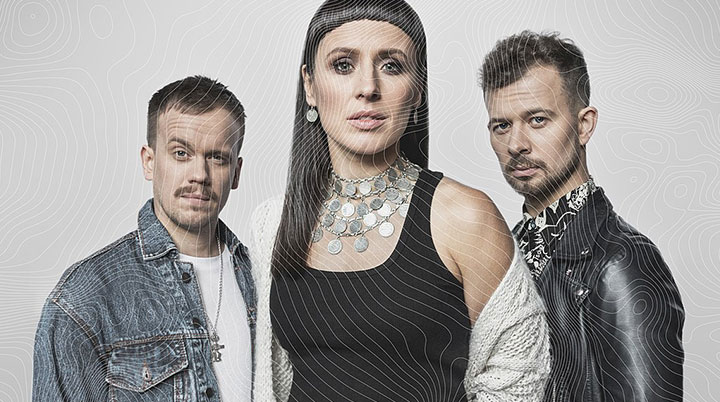 New kids on the block? Not quite, three albums in Trad Attack! make their move and it’s a bold, striking one. How’d you reinvent your tradition for the here and now? If you’re Estonian then perhaps there haven’t been many reference points, sure they’ve got folk metal or should that be thrash folk, but then so have most of Russia, Finland and Scandinavia. Trad Attack! are coming from a different scenario anyway; may be place them alongside St. Petersberg’s Theodor Bastard, no I didn’t make that up, as pioneers of applying 21st century possibilities to break any walls surrounding folk convention. Beginning with sampling audio archive recordings of Estonian folk then adding samples and instrumentation – particularly bagpipes – Attack! first created two albums of bubbling, psychedelic, amplification which still took structures from the tradition, the possibilities were there, it just needed them to figuratively light the blue touch paper.

‘Make Your Move,’ is absolutely enticing, a rocket blazing a fiery trail in an arc across the sky at night. What the band have done is approached this with no preconceived notions and just gone ahead and made a thoroughly 2020 album, one that just happens to be influenced by Estonian roots. There are throbbing rhythms, sonic guitars, distortion and rustic instrumentation that energise rather than just regenerate. The lyrical sources range from poetry, to age old doggerel, via ancient prayer chants, wedding rituals to children’s games, mostly filtered through the talents of vocalist and piper Sandra Vabarna. That’s not to say the two guys in the band don’t come up with the goods too, guitarist Jalmar Vabarna makes his twelve string guitar echo and sound far larger than it should by rights, drummer Tonu Tubli is in charge of thunder and lightning. ‘Rikas Sittus,’ as sonic a boom as ever I’ve heard in ages whilst ’Pass Pass,’ pounds a magical rite over swirling pipes and reverberating electro pulse. There is of course the proverbial ‘and so much more,’ which I haven’t the space to elaborate on, however special mention for the significant packaging which expands on their ideas and motivations, handily with translations.

Certainly the finest offering of 2020 so far, as things stand it may even be the best thing you’ll hear this year if you’ve got an ear for music which invigorates and cries out to be heard whatever the language or root. Grab it and cherish it.