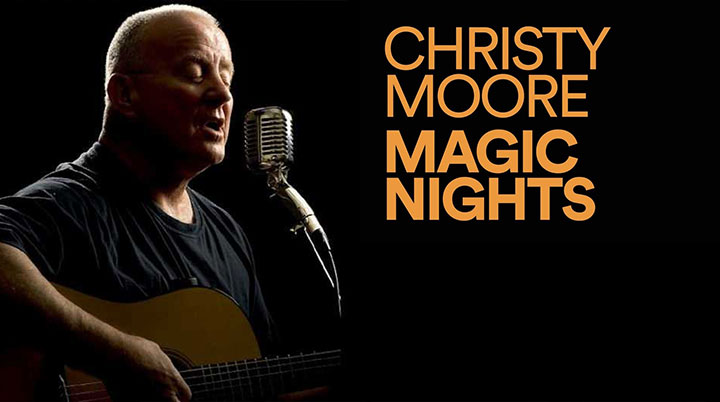 The Moore the merrier…

Someone had the unenviable task of listing all Christy Moore’s recent gigs on the fold out cover and booklet of ‘Magic Nights.’ Quite a feat in itself since the sources of the material here are drawn from venues the length and breadth of the both Ireland and the U.K. Neither is Moore an artist who fights shy of releasing live material, having previously let loose more than his fair share of concert recordings, quoting his sleeve notes in concert is “ where the magic happens. In plain speak he loves the audience and the audience love him. Over a double CD which acts a window on his career that much is obvious, drawing on material he played with Planxty, Moving Hearts and from his prodigious solo records, what you have amongst these twenty six selections are almost definitive statements on a man, his material and more importantly his meaning and motive.

He remains deeply rooted, the turns and twists of his homeland’s history, times which he ahs lived through are represented by a decent selection of contemporary songs, the most adaptable and relevant to many situations remains Jackson Browne’s ‘Before The Deluge.’ Of the traditional choices if you twist my arm I’ll point out ‘ Tippin’ It Up To Nancy,’ as the best example, it just seems so apt that with his vocal and instrumental choices he should cover this song with all its rhythmic tricks, dedicated to his ex band mate Liam Flynn. There are copious notes and photos, his musicians are all old hands and associates Declan Sinnott, Mairtin O’ Connor to name but two, all know how to bring out the best in Mr. Moore.

There is a question hangs over the album, he admits in writing ‘ every gig is cherished,/the end draws closer,’ but if that means this particular round of touring; he’s surely not thinking of hanging up his guitar? Whatever his motivation ‘ Magic Nights,’ has to merit inclusion in your collection purely because it sums up one of the lynch pin artists of Celtic music so completely. No one has done more to push the envelope and yet always recognise where he and his music are from. A remarkable talent.