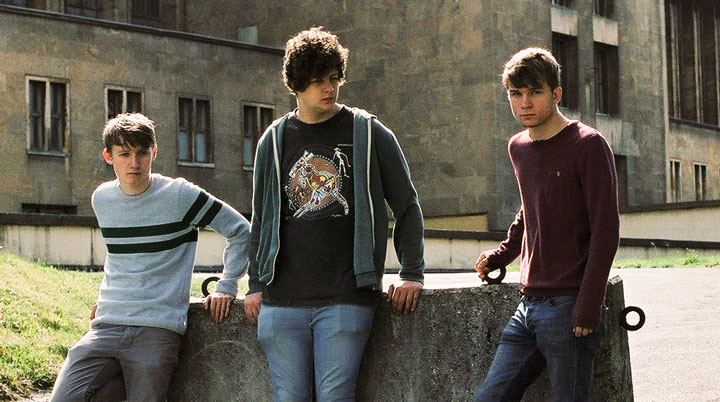 All The Luck In The World are three Irish songwriters, Neil Foot, Ben Connolly and Kelvin Barr currently based in Berlin. The band create an intimate blend of Alternative-Folk and share a collective passion for storytelling, composition and song craft. Formed in 2011 while Foot was still in school, Connolly and Barr joined two years later to collaborate on a debut record for the band, which was written in Foot’s secluded family home in the Wicklow mountains.

In 2013 / 2014 the band received their first international attention due to the home-recorded “Never”, which sold more than 120,000 singles on iTunes worldwide. After signing with Barfilm and Haldern Pop Records, they released their eponymous album on January 1st 2014, and subsequently toured the record across Europe. After many distinguished festival slots and three headline club tours, they began to turn their focus to new material.

While working on their second album in 2015, the band focused on crafting a unique soundscape, creating their own home-made instruments by sampling organic, acoustic sounds. They converted a forgotten woodshed into a studio space in the Wicklow countryside, and aptly named it Haven. Here the band began to compose and craft songs based around a set of stories, both personal and abstract, that were patiently developed over the course of a year. The album called “A Blind Arcade” was then recorded between this space and Golden Retriever Studio in Berlin with the help of producer Paul Pilot. Ben Connolly comments;

“It was tedious, but it was exactly what we wanted to be doing. It took over our lives for quite awhile, getting lost in detail and learning as we went. The hours put in back in Wicklow really paid off when we came to the studio in Berlin. We were not just making simple demos only to start from scratch once in the studio, we built much of the songs before even starting in Golden Retriever. This gave us more time to be creative in the studio, availing of tools and instruments that we lacked back home.”

After finishing their studies in Summer 2017 the band moved to Berlin to open another chapter. “It was just a decision to move forward. We had spent much time in the city over the last few years, and found that it was reliably conducive to creativity. Those scattered stints in Berlin were always promising, and of course the nature of life in Berlin is appealing. When we arrived, there was no fear or worry. It felt right, as a band and as people.”

“It’s a combination of experiences, empathy, and fiction. We put a lot of thought into the lyrical content of each song, taking our time rather than settling with something we weren’t completely happy with. We are always teeming with musical ideas and it’s a constant priority to maintain a high standard lyrically when we write. It prolonged the process for sure, but the reward is a group of songs that we can be really proud of.”

“I think these songs are a little more conceptual than our first record. I wouldn’t say we’d intended it to be that way, but we were definitely taking the time to really discuss some of our song ideas as concepts and stories and think about them from different angles and perspectives.” Musically, our sound has changed as we’ve been experimenting at home and in the studio. Not that it’s something completely different, it’s really just that it’s developed naturally over time. We are always looking for subtle points of interest, whether it be in a time signature change or a unique sound; something to trigger the listeners curiosity. We’ve created a few of our own sample instruments for this record and that’s become a defining feature for us I think. It’s was a great way for us to try to create something that felt quite unique to the band. We’ve had more time to craft these songs than we have in the past, so there’s perhaps a bit more clarity in the little details and textures.”
The band have notched some respectable success off their own backs in recent years. Their home-recorded track “Never” has sold more than 120K downloads on iTunes, and they boast a combined 10 million plays for their tracks on Spotify. A video they put out before Christmas has done over 20,000 plays to date on youtube too. Various other blogs like Indie Shuffle have featured them in the past, and Clash premiered the album’s first single “Landmarks” describing is as “a wonderful piece of acoustic songwriting”.

The are touring in April with the first of the two London dates already sold out!!