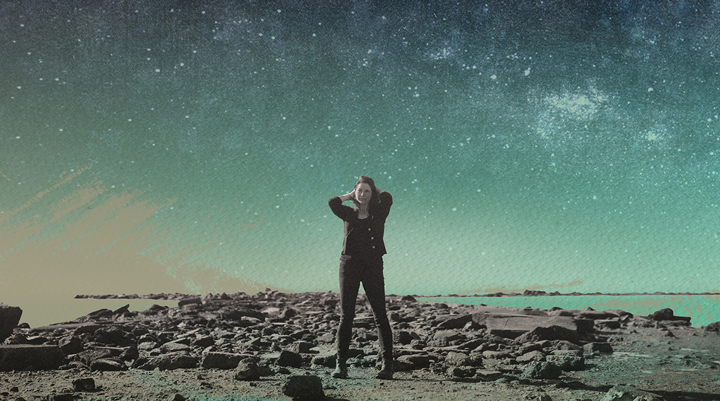 Kris Delmhorst already has seven full albums and around two decades of touring under her musical belt. An abundance of experience that shines through on her eighth album, ‘Long Day In The Milky Way’. It’s a record that has been put together with care and there’s not the slightest hint of casual, last minute additions to flesh out the recording.

The album’s beginnings were back in pre-pandemic 2019 when Delmhorst recognised the underlying anxiety that sat in the background of the freshly composed opening song, ‘Wind’s Gonna Find Away’. Its first line ultimately providing the album with its title along with reflecting the album’s theme of connecting to the beauty in the world at difficult times.

As you might expect from personal soothing experiences, immersing yourself in nature is a recurring lyrical motif whether that’s the melting snows in ‘Call Off The Dogs’ or the sounds of owls and sparrows on ‘Bless Your Little Heart’. Observation of personal behaviour is also used as a way to help calm the soul on tracks like ‘Nothing ’bout Nothing’ and ‘Secret Girl’. Often the meaning in these songs is slightly mysterious and leaves the listener to draw their own interpretation.

Most of the songs are composed by Delmhorst, sometimes with trusted collaborators. The exception being her cover of Rickie Lee Jones’ ‘The Horses’ which perfectly captures the two earlier mentioned approaches using natural imagery and relationships but in an even more mystical manner.

Musically, the album presents as a lush and relaxing mood as she draws on friends made along the way in her extensive career. They fall broadly into two categories with a chorus of backing vocalists used to adorn the work of a competent bunch of multi-instrumentalists playing on everything from the harp to the trombone. It’s clear that her early background as a student of classical cello and her wider musical tastes have influenced the arrangement of these songs. The net result being the creation of a languid and listenable record without cluttering the music with overblown solos.

This is neither an album of ‘boy meets girl’ songs nor the storytelling approach that some other singer songwriters favour. Its approach to lyrics, melody and arrangement have a good level of sophistication that will suit those who like an album whose meaning grows with each listen. Indeed, those patient listeners will find that there’s a soothing depth to ‘Long Day In The Milky Way’ that perfectly fits the strange times of 2020.