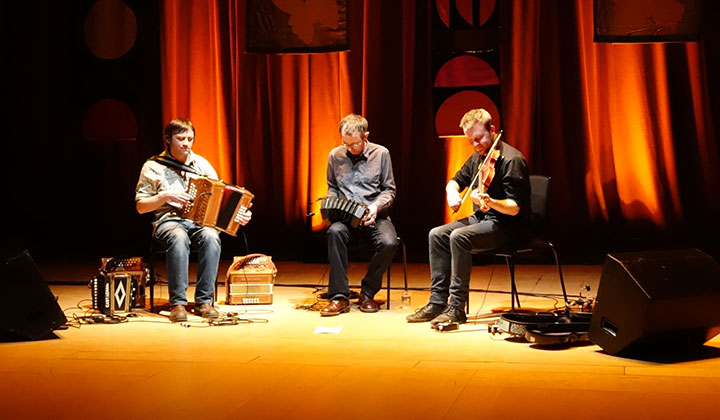 Folk In The Fall offers a long-awaited day of live music on 28 November 2020 featuring some of the UK’s most acclaimed musicians, celebrating the ongoing partnership between Alan Bearman Music and Kings Place.

In troubled times for the live music sector, Kings Place is pleased to be able to open its doors again and offer performances in a safe environment from some of the most talented and engaging performers in the country including Leveret, Martin Simpson, Kathryn Tickell & Amy Thatcher, Jimmy Aldridge & Sid Goldsmith and Emily Portman & Rob Harbron. https://www.kingsplace.co.uk/your-visit/our-safety-measures/

As Artistic Associates at Kings Place, Alan Bearman Music, have been actively involved in folk music programming and consultancy at the venue over the past few years, regularly curating series of themed events.

Leveret is the unique collaboration between three of England’s finest folk musicians. Andy Cutting (button accordion), Sam Sweeney (fiddle) and Rob Harbron (concertina): each regarded as exceptional performers and masters of their instruments. Together their performances combine consummate musicianship, compelling delivery and captivating spontaneity. Leveret’s music is not arranged in the conventional sense and the trio rely on mutual trust and musical interaction to create new settings of their repertoire in the moment, with no two performances alike. Variations Live, a limited edition live double album was released this October, featuring tracks from all their four studio albums plus three unreleased tracks. 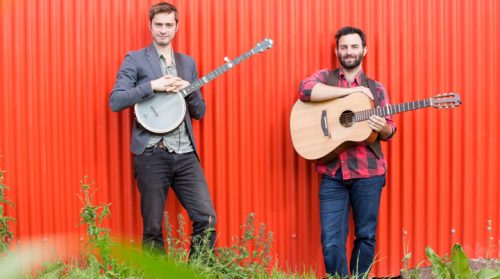 Jimmy Aldridge & Sid Goldsmith are one of the finest duos to have emerged onto the British folk and acoustic scene in recent years. Their unique ability to make old songs seem relevant and new songs sound ancient has brought them widespread critical acclaim. Their latest material includes original compositions with reflections on the modern world and storytelling that gets to the heart of life in Britain today, alongside some unearthed gems from the British and Irish folk canons delivered with powerful harmony singing and sensitive musical arrangements. Two of the most exciting musicians and social commentators on the scene.

Northumbrian piper and composer Kathryn Tickell performs with her long-time “right hand woman” Amy Thatcher (accordion, clog dancing). Evocative slow airs move seamlessly into rapid-fire jigs and reels with Amy’s clog steps providing a joyous percussive element! Kathryn Tickell is widely acclaimed as the foremost exponent of the Northumbrian pipes. Composer, performer, broadcaster and recording artist whose work is deeply rooted in the landscape and people of Northumbria, her extraordinary career has seen her champion her native traditions and traverse genres from jazz and world music to large-scale orchestral works, including collaborations with Sting, The Chieftains, Penguin Café Orchestra, London Sinfonietta and many others.

Emily Portman & Rob Harbron are two of the finest performers on the UK folk scene with award-winning reputations as performers, composers and recording artists. Now they have formed an inspired new collaboration in which they explore traditional English songs linked by a theme of margins – the ordinary and extraordinary stories of marginal people and landscapes, retold and remapped into the often tumultuous landscapes of a post-Brexit Britain, where parallels abound.

Emily (voice, banjo) is best known as an original songwriter and for her work with the award-winning folk band The Furrow Collective. Rob (concertina, guitar, voice) tours with Leveret, Fay Hield, Jon Boden and many more, being in great demand as one the finest multi-instrumentalists in the UK.

With a new intimate solo album, Home Recordings, released on 13 Nov on Topic Records, Simpson remains one of the finest ever acoustic and slide guitar players, equally at home playing English traditional folk, American folk and blues and his own compositions. Over 40 years after he recorded his first album, Golden Vanity, Simpson remains ever fresh, continuing to convey his diverse treasure trove of material from the heart, performing with rare subtlety, intensity and honesty. A true master of his art, interpreting material from tradition or singing his own potent self-penned songs, Simpson is a remarkable storyteller: captivating and profoundly moving.

Save 10% when booking 3+ Folk in the Fall events