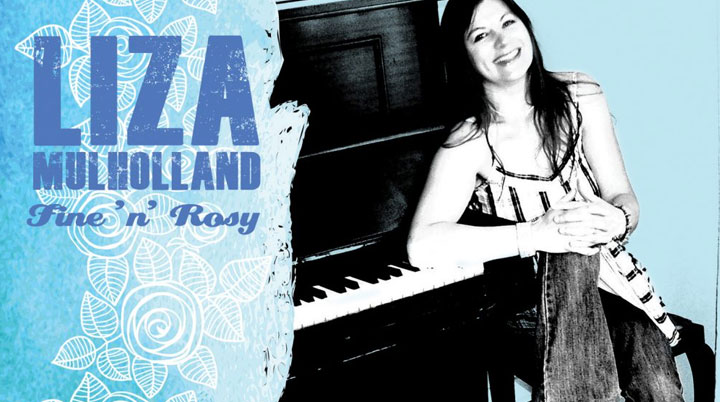 Liza Mulholland is a woman with a finger in many pies – musician, tutor, manager, producer, journalist  – that’s just the half of it. ‘Fine and Rosy’ is her debut album and is a real family affair – among other prominent musicians, cousin Rua Macmillan lends his fiddle, additional cousins and siblings provide vocals and son Roddy plays the pipes.

The result is a warm, heart- warming and at times heart-breaking album. Mulholland’s distinctive, whispery voice gives an indie quality to her songs.  There is some dark material on ‘Fine and Rosy’ – ‘Took My Breath Away’ is a song of abuse and tragedy, ‘On The Road’ an intensely personal song of trauma, ‘How Many More Willy MacBrides?’ is an anti-war song and a plea for change. But interspersed with the dark are songs of hope – from ‘Cadal Samhach’, a song to her sleeping child, ‘Fine and Rosy’, the album’s title track  is a song of love and well-wishing and ‘The Kiloran Jig Set’ consists of two tunes inspired by places beloved by Mulholland.

The only song on the album not written by Mulholland is ‘Mi Le M’ Uilinn Air Mo Ghluin’ a song written by poet and songwriter Murdo MacFarlane, first cousin to her maternal grandmother – a Gaelic love song, beautiful and haunting.

‘Fine and Rosy’ is an album of fine song writing and a deeply personal offering from Mulholland, covering bad times, great times, family and legacy, hopes and fears, wishes and pleas.

A brave and beautiful album. Liza Mulholland can probably do anything.