Let’s Get Happy Together – Maria Muldaur with Tuba Skinny. 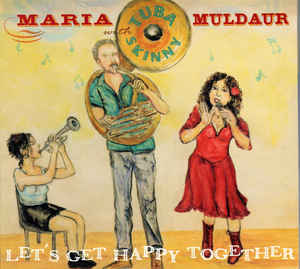 Maria Muldaur has always been happy to let her roots show and we’re not talking faded hair dye here. Linked with the New Orleans street collective Tuba Skinny, she’s got the balance about right, blues and jazz with jug band irreverence built in, it almost mirrors her own  musical history. They’d fallen together when Muldaur asked them to back her at a  Folk Alliance concert just before lock down struck the States, at that very gig Stony Plain offered them an album, here it is.

Muldaur seems to revel in the obscurity of her sources, Louis Armstrong’s first wife Lil Hardin anyone? She’s the author of the animated title track, equally ‘I Like You Best Of All,’ from The Goofus Five (truly,) and the blues ‘Road Of Stone,’ by Sweet Pea Spivey, sister of Victoria apparently. All involved seem to be having a ball, photographic evidence comes from the booklet where they all grin like Cheshire cats. The music’s a brasss laden hoot and while it won’t change your life instantly if you follow their suggestion to investigate the originals on YouTube at least you’ll get a new hobby. Me? I’m off to discover the splendidly named Annette Henshaw who seemingly recorded 250 tracks in the 1930s and was a star in the US during the Depression topping a poll of male and female singers with Bing Crosby. Who knew?

Such are the windows opened by these tracks, entertaining and informative equally.